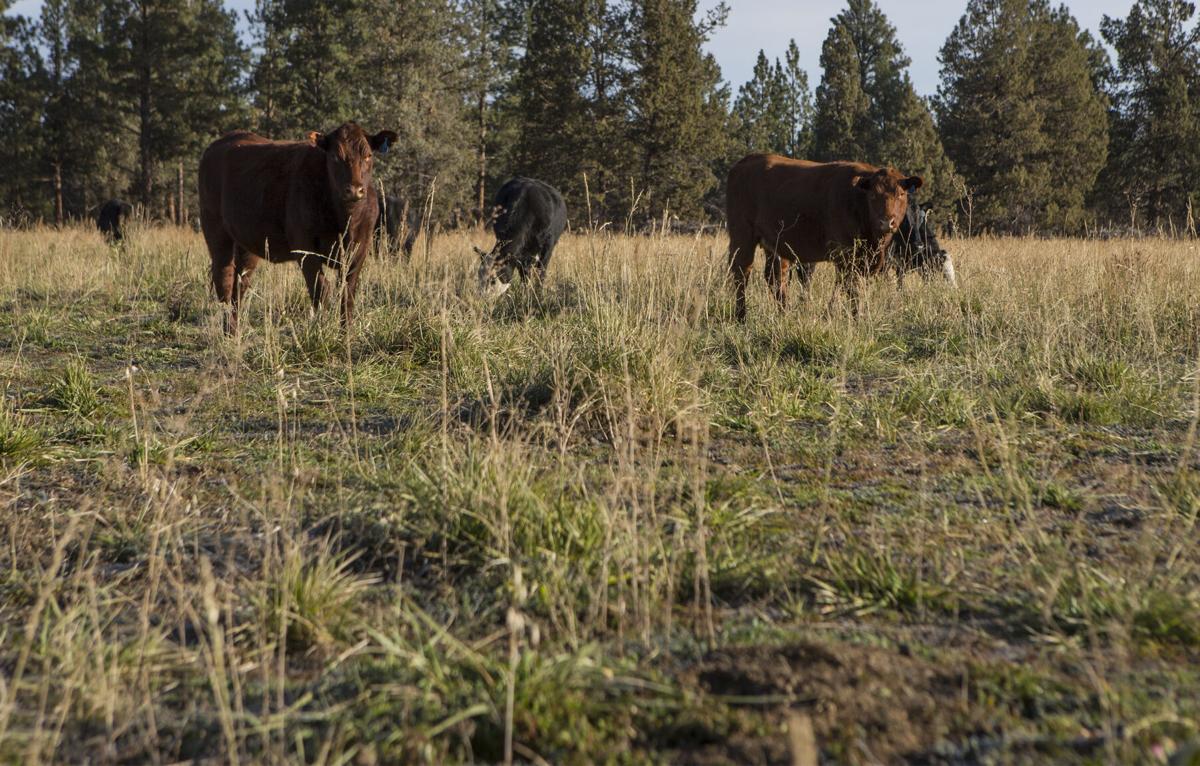 A portion of the Sisters Cattle Co.’s herd grazes on a variety of grass and plants in a field that has benefited from regenerative grazing. 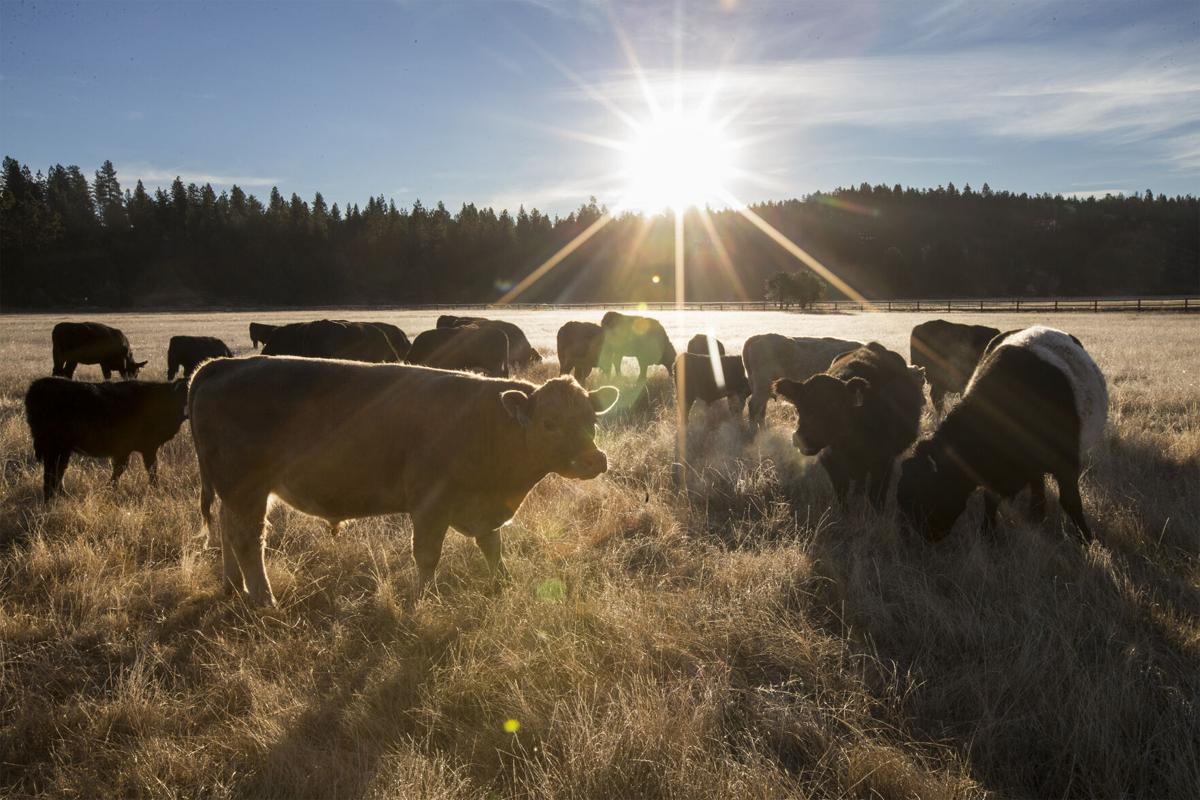 Cattle graze closely together in a field near Sisters on Friday, Oct. 23, 2020. 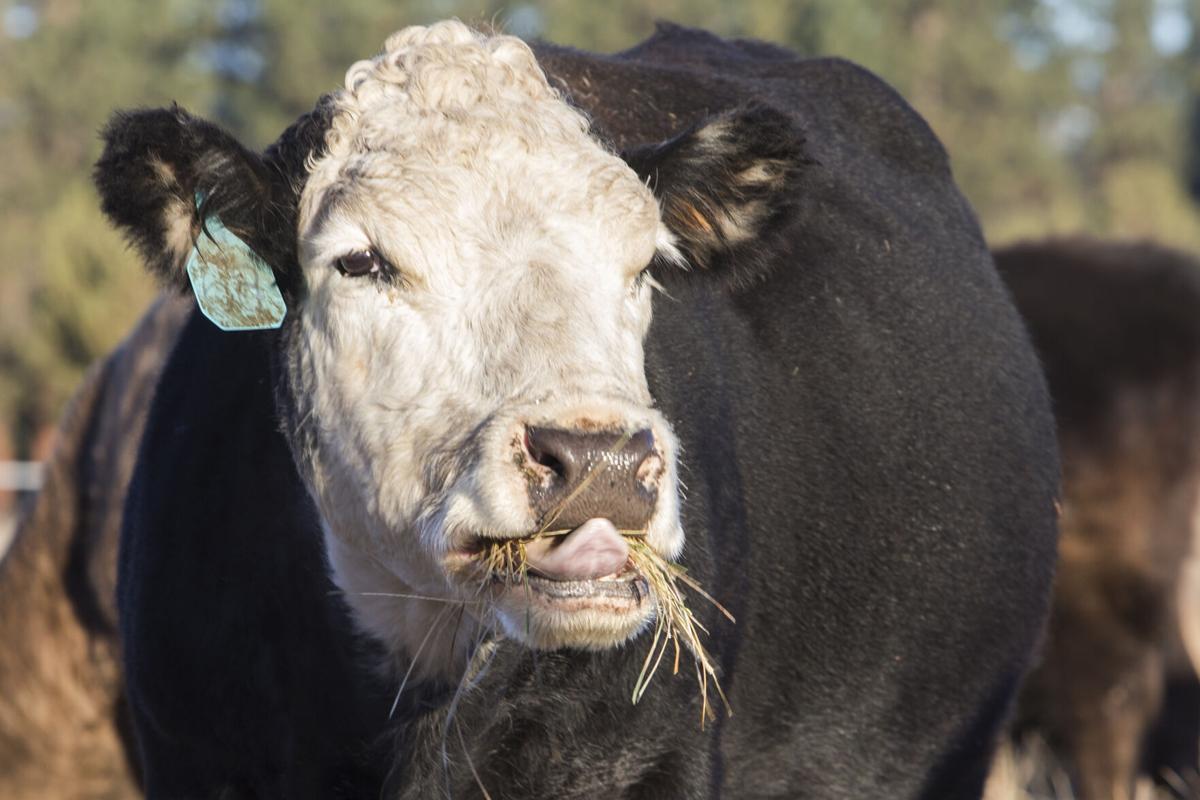 Cattle feed on grass in a field near Sisters on Oct. 23. Hobbs Magaret, owner of Sisters Cattle Co., has implemented regenerative grazing practices as a way to build healthier soils and plant diversity while producing locally raised beef for his customers. Using small paddocks, Magaret keeps his cattle close together, moving them throughout the day until the whole field is equally grazed. 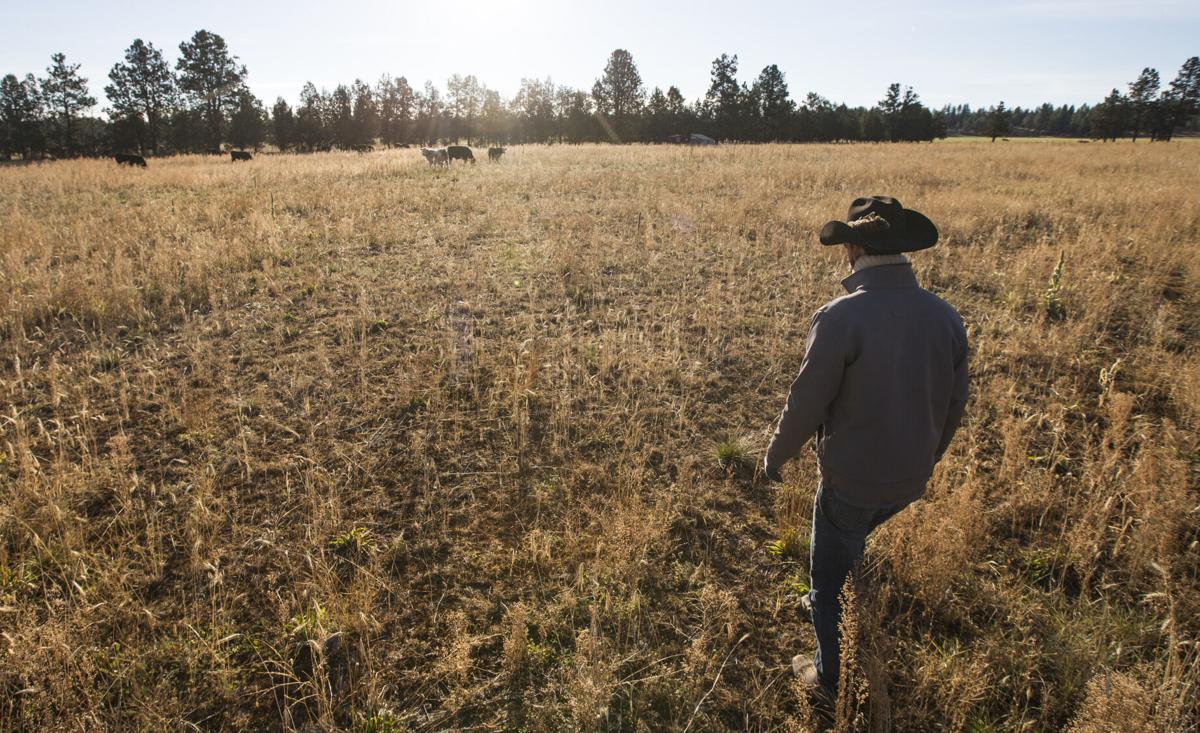 Hobbs Magaret, owner of Sisters Cattle Co., walks through a field near Sisters where he has implemented regenerative grazing practices.

A portion of the Sisters Cattle Co.’s herd grazes on a variety of grass and plants in a field that has benefited from regenerative grazing.

Cattle graze closely together in a field near Sisters on Friday, Oct. 23, 2020.

Cattle feed on grass in a field near Sisters on Oct. 23. Hobbs Magaret, owner of Sisters Cattle Co., has implemented regenerative grazing practices as a way to build healthier soils and plant diversity while producing locally raised beef for his customers. Using small paddocks, Magaret keeps his cattle close together, moving them throughout the day until the whole field is equally grazed.

Hobbs Magaret, owner of Sisters Cattle Co., walks through a field near Sisters where he has implemented regenerative grazing practices.

SISTERS -- Regenerative grazing has become a recent buzzword among social media savvy ranchers and is seen as an eco-friendly way to produce beef. The Sisters Cattle Co. is out to prove the hype really can help Central Oregon’s grasslands.

Hobbs Magaret, the 34-year-old owner of the fledgling company, is raising beef cattle in Sisters in a way that not only avoids all chemicals, fertilizers and corn, but also leaves the grazing fields in a healthier state compared to when he started, using only cows to improve the land.

As unlikely as that sounds, his method of ranching — regenerative grazing — is becoming more widespread in the U.S. and other countries. After just 18 months in production, Magaret said he has improved 200 acres of land in the Sisters area.

What’s regenerative grazing? It’s a method of raising livestock that not only produces food for people but also regenerates grassland that has been degraded by extractive practices or poor land management.

The practice was pioneered more than 50 years ago in Zimbabwe and South Africa but only experienced widespread growth in the past decade. It began with the notion that large numbers of grazing animals, such as buffalo and cattle, help improve the health of a grassland simply by slowly grazing across it. Together they push large amounts of biomass (roots, grass seeds, excrement) into the earth, improving soil health.

Regenerative grazers such as Magaret do this by grouping their animals closely together in one section of a pasture and then move them once that section is depleted. The moves usually happen two or three times a day to mimic the movements of wild grazers. Portion by portion, the entire field gets fully and equally grazed and naturally fertilized. Magaret uses electrified wires to act as small paddocks to keep his cows in certain areas until it’s time to move again.

The benefits of regenerative grazing include increased diversity of plant, animal, and microbial life, said Scott Duggan, an assistant professor with Oregon State University Extension’s College of Agricultural Sciences. Duggan said it also reduces soil erosion and has the potential for increased carbon sequestration. It’s utilized and is currently being practiced in other parts of Central Oregon, he said.

“Doc and Connie Hatfield were pioneering regenerative grazing on their ranch in Brothers, Oregon, starting in the late 1970s,” said Duggan.

For Magaret, this grazing method also forces his cows to chew through a greater variety of grass types. The upshot is that the cattle ingest a more varied diet while also preventing overgrazing.

“If there were no wires, they would have access to the entire pasture, they would go around and select the best items, and the items that are not as delicious would be ignored, then they would hit the delicious items again when they pop up, until they kill them. So the desirable, native grasses would be overgrazed and killed,” said Magaret.

Magaret says he is interested in finding areas that are degraded and improve them. He works with local landowners in Sisters and grazes his cattle on their fields.

“Better soil means better forage. More forage means for cattle, so that becomes a positive feedback loop,” said Magaret. “The other part is that carbon in the soil is good. In the last 100 years, we have lost 70% of the carbon that was stored in the soil, it has gone into the air, it is particularly from overgrazing and tillage agriculture.”

He is also interested in raising cattle in a stress-free environment. Bunching them together in a close herd, he said, is one way to decrease stress.

“They are happier than the cows in big pastures,” said Magaret. “It might seem counterintuitive, but they are herd animals — for millions of years they developed a protection mechanism, which is to stay close together. That protection mechanism soothes them when they have a whole group protecting them, and they calm down.”

Magaret’s approach to the slaughter and butcher of his animals also diverges from the norm. While most beef producers truck their cattle to a slaughterhouse for USDA inspection and slaughter, Magaret has them slaughtered on the farm, believing this method to be less stressful for the animal.

“There is no suffering. No taking them to a strange location. No being around strange smells or sights. No being on trailer, none of that,” said Magaret.

USDA inspection for on-farm slaughter is unavailable in Central Oregon, so Magaret must do a so-called custom-exempt slaughter. This means that the cow (or a portion of the cow) must be pre-sold to buyers prior to slaughter.

“I am not against inspection by USDA, but I don’t want to take the animal to a place where it can be inspected while it’s being slaughtered, that’s a terrifying situation for the animal,” said Magaret.

After the body is turned into a carcass by the butcher, the leftover parts — including the feet, skulls, and organs — are placed in a pit with woodchips for composting.

“Within a couple of months, there is nothing left,” said Magaret.

The carcass then hangs in a butcher shop for three weeks, after which it’s cut-to-order and wrapped. Central Oregon buyers must pick up their order at Cinder Butte Meat Co. in Redmond. For Willamette Valley buyers, the meat is trucked over the mountains to a designated location for pick up.

The smallest purchase is 100 pounds or a quarter of a cow. The estimated cost for beef comes out to around $10 per pound. Magaret advises his customers to have a large stand-up freezer in order to store that much meat.

Magaret has been publicizing his grazing practices on social media and has a strong following on TikTok. Part of his marketing includes eco-friendly practices and his limited use of fossil fuels in his business.

“Now we have 7.5 billion people on the planet, and when fossil fuels run out how are we going to feed all those people? I am doing my best to try to answer that question,” said Magaret.

Reaction to regenerative grazing in Sisters is mixed. Matt Cyrus, Deschutes County Farm Bureau President, said even after grazing, some additional fertilizer will be needed for the ground.

“The reality is that it (regenerative grazing) is going to be a net loss of soil over time,” said Cyrus. “The fact that the animals come off the ground, you end up with a net loss, if the cow eats 20 pounds of grass, they don’t put 20 pounds of manure out the backside, they have converted part of that to energy, part of that has gone to muscle and fat development, a certain percentage has been expended to survive.”

“What Hobbs is doing is a cool idea and awesome for marketing but nothing is long-term, sustainable without some outside input, you are still going to need to fertilize that ground in some fashion,” Cyrus added.

Others in Sisters and around Central Oregon just see Magaret’s business as a way to get hold of locally-produced, grass-fed steaks. The company has 60 customers and a short waiting list for others who want to join. Magaret dreams of one day opening his own butcher shop in order to sell individual steaks and other meats in smaller amounts. But that is still likely a few years away.

For now, Margaret is content to be building a business that intertwines ranching and the environment, which are often at odds.

“I want to put carbon in the ground and take carbon out of the air. I want to create more biodiversity and make more fertile grasslands,” said Magaret. Regenerative grazing “will build a bridge between ranching and the environmental community.”