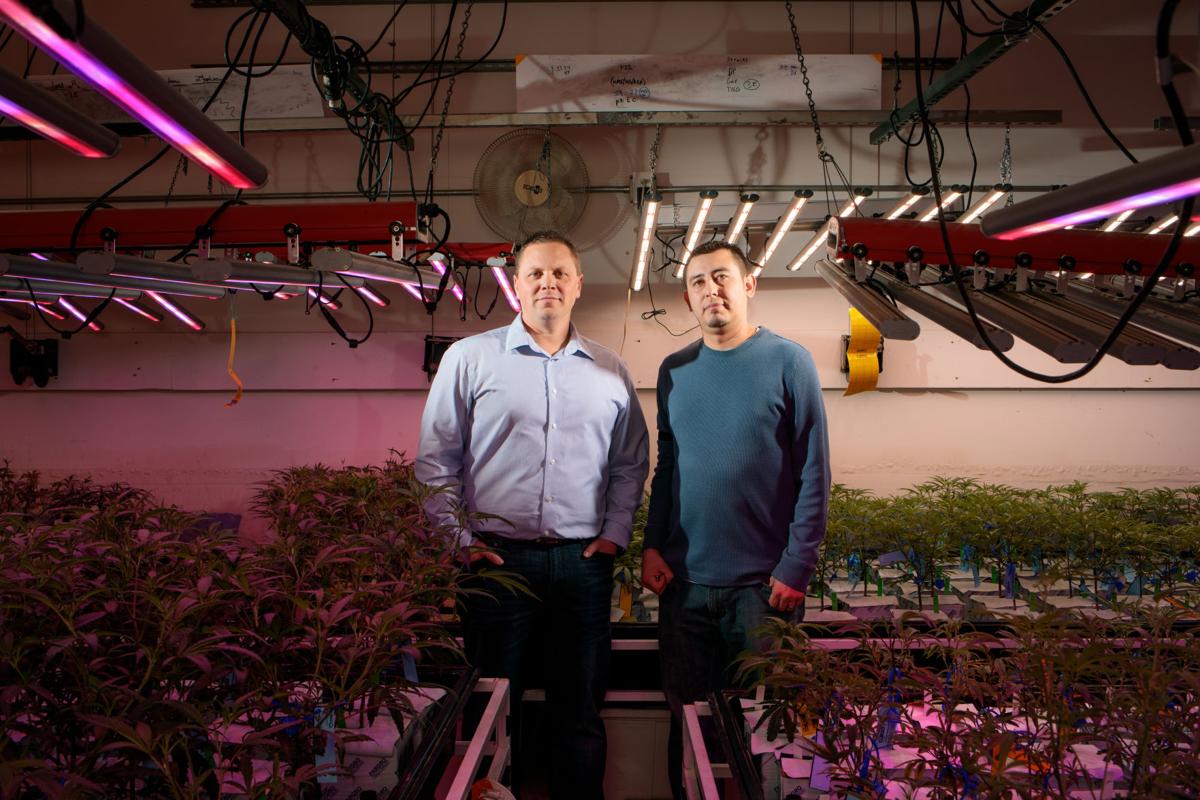 Brian Cusworth, director of operations, and employee Chris Baca at the Clinic, a licensed marijuana growing facility using carbon dioxide produced by the beer brewed at the nearby Denver Beer Co. 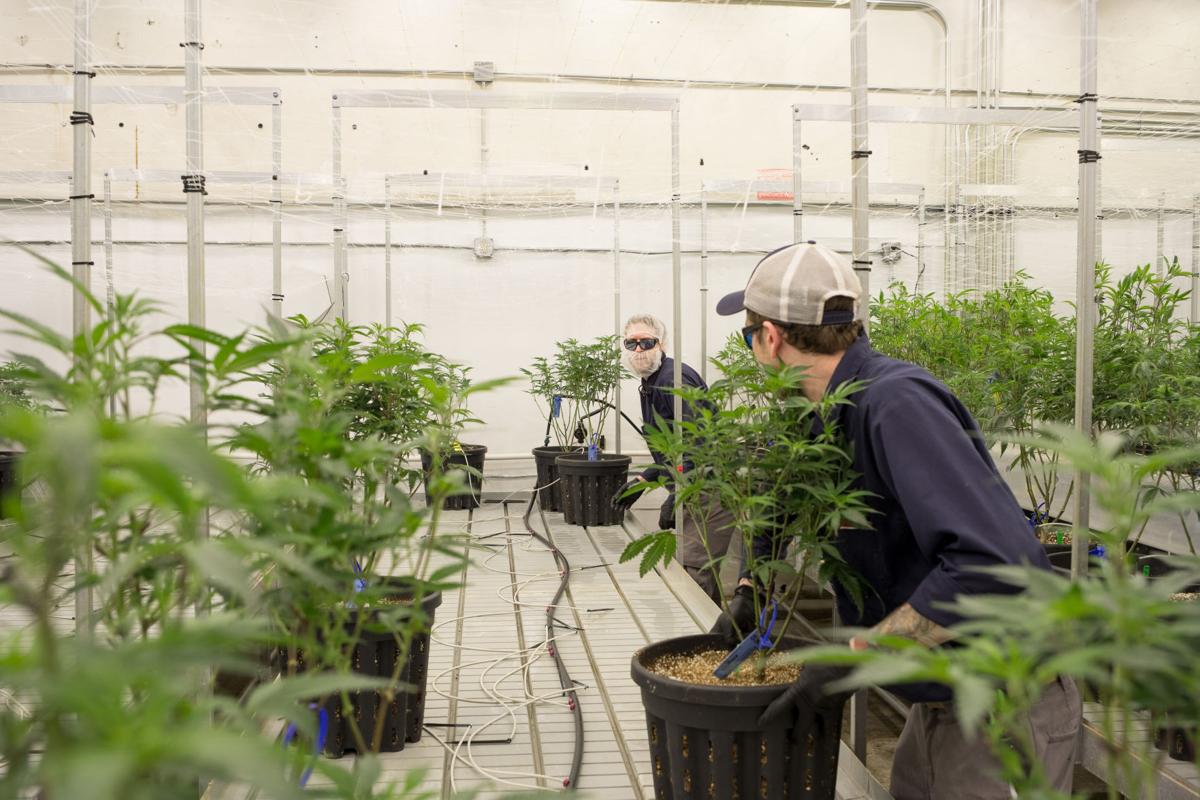 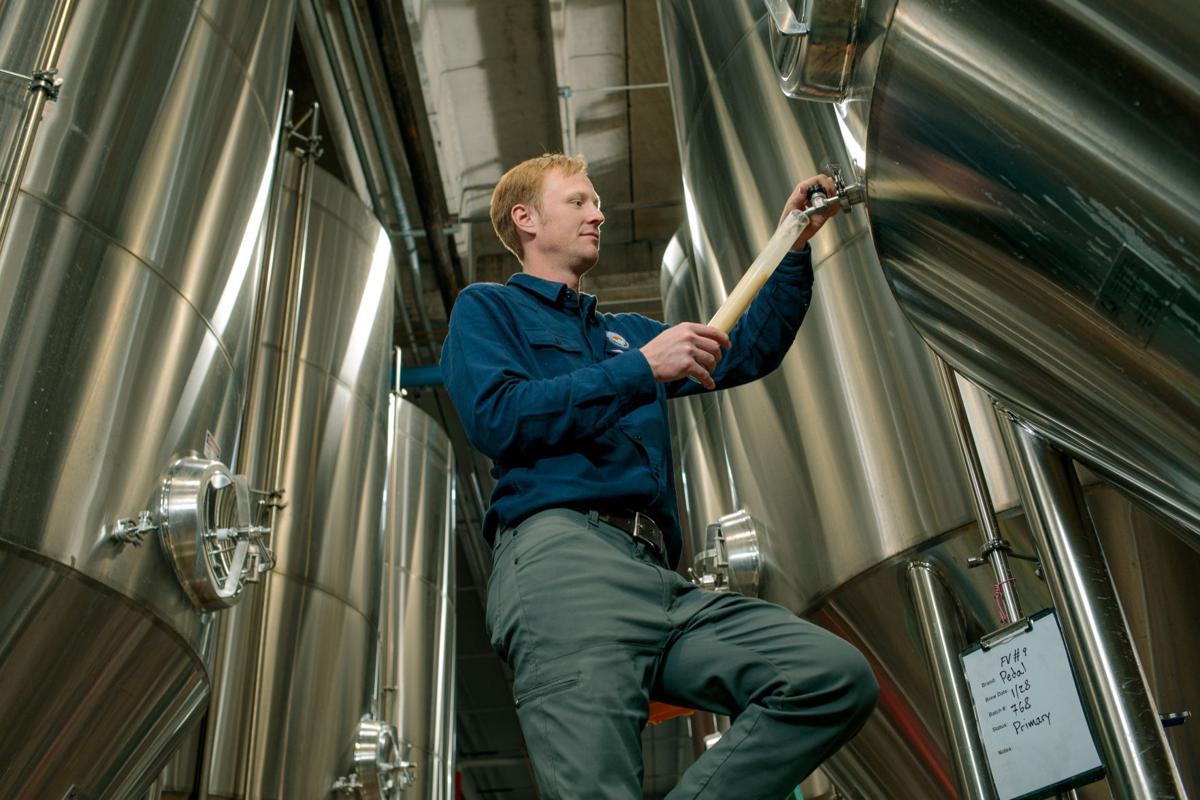 inside the Denver Beer Co. 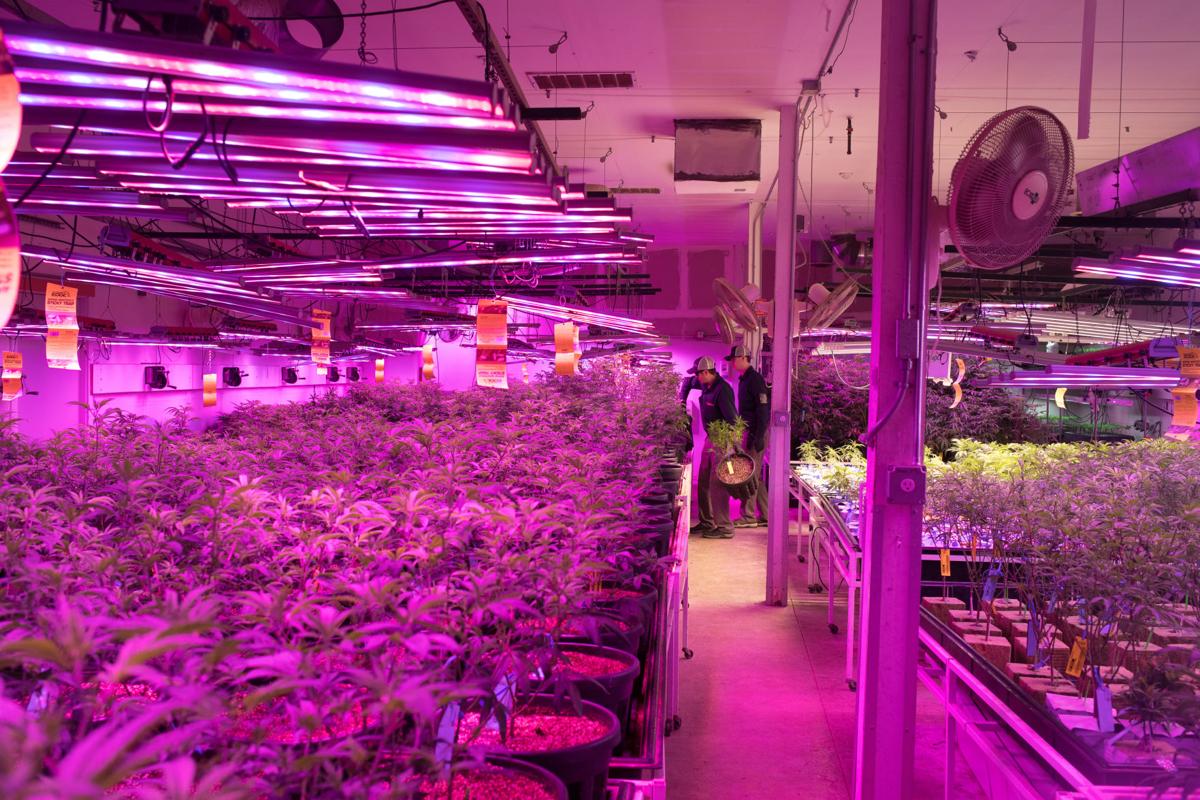 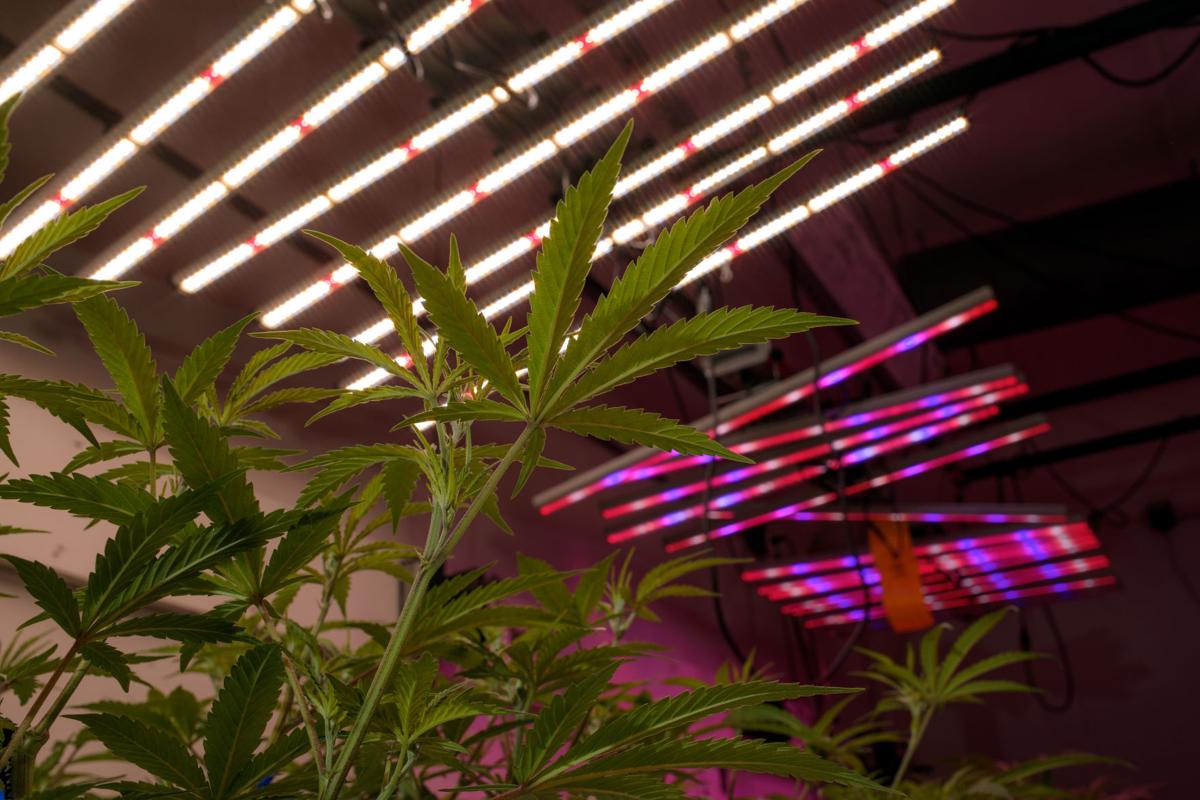 Marijuana plants grow inside The Clinic facility on Feb. 6, 2020, in Denver. MUST CREDIT: Photo for The Washington Post by Matthew Staver

Brian Cusworth, director of operations, and employee Chris Baca at the Clinic, a licensed marijuana growing facility using carbon dioxide produced by the beer brewed at the nearby Denver Beer Co.

inside the Denver Beer Co.

Marijuana plants grow inside The Clinic facility on Feb. 6, 2020, in Denver. MUST CREDIT: Photo for The Washington Post by Matthew Staver

DENVER — The state of Colorado and three small businesses are trying a novel approach to reduce carbon emissions that sounds like something out of the fever dreams of Willie Nelson: using carbon dioxide produced from beer brewing to help marijuana plants grow.

The refrigerator-sized device purifies the greenhouse gas and chills it into a liquid. Stored in 750-pound tanks, the recovered CO2 is transported about nine miles to the Clinic, where growers vaporize the liquid and pump it into rooms full of pot plants to speed photosynthesis.

“This is an example of something we think has great potential to scale in Colorado — we have a thriving craft brewery industry and a thriving cannabis sector,” said Gov. Jared Polis, D, whose administration provided technical and communications support, but no funding, to the project. “It’s an economic win — and it has the potential to help with climate.”

CO2 emissions represent a large percentage of the greenhouse gases that trap heat in the atmosphere, warming the planet.

Polis, who was elected in a blue wave in 2018 in which Democrats captured the state legislature, campaigned on a promise of 100 % renewable power by 2040. The governor signed a bevy of laws to facilitate such a transition, including a bill that set a target for a 50 % reduction in greenhouse gas pollution below 2005 levels by 2030.

The carbon exchange between the nation’s recreational pot marketplace and one of its most robust craft brewing industries is a small step toward his climate change goals that could be applied in other states, Polis said. Colorado is home to approximately 1,142 licensed marijuana growers and about 396 craft breweries.

The 16-week pilot program, which officially begins Tuesday, is designed as a cost-efficient way for breweries and cannabis firms to cut carbon dioxide emissions by eliminating the need for them to purchase the gas from power plants and have it trucked across the state. If it proves successful, most CO2 emissions saved by such a program would be the result of fewer truck trips.

Denver Beer Co. will also use the captured CO2 to carbonate and package its beer instead of venting it.

“This is excellent and shows how to close the carbon cycle,” said Alissa Park, an engineering professor at Columbia University whose research focuses on capturing CO2 from industrial sources before it enters the atmosphere. “We need to develop a new carbon economy, a new way of seeing things at the end of the day.”

The Colorado project is one example of emerging methods that reuse carbon in ways that could transform how entire industries do business. These include a process that injects carbon dioxide captured by industrial gas suppliers into concrete when it’s mixed. The $20 million Carbon XPrize, to be awarded this fall, encourages entrants to develop technologies that will convert CO2 emissions from power plants and industrial facilities into everyday products such as vodka, watches and pens.

Earthly Labs technology, in use by two dozen or so breweries nationwide, carries the potential to significantly reduce greenhouse gas emissions, said Amy George, founder and chief executive. The company’s goal is to avoid 1 billion metric tons of carbon dioxide emissions by 2030, which is the equivalent of pollution generated by 257 coal-fired power plants over the course of a year.

“If you do the waste stream over all the breweries in the world, it’s a big number,” she said. “We could get there pretty quickly, and hundreds of millions of tons of carbon dioxide could be saved.”

In Colorado, the Denver Beer Co. and the Clinic are focused on ensuring that the pilot project is efficient and economical. And that it makes tasty beer and cannabis.

The brewery’s co-founder, Charlie Berger, said his business spent several years testing Earthly’s CiCi, as its carbon capture technology is known. Those tests made it clear that the machine — emblazoned with a charcoal-colored sign declaring, “This box can capture more CO2 than 1500 trees a year” — is a “game changer.”

Gesturing toward rows of two-story-tall, 120-barrel stainless steel fermentation tanks in a cavernous warehouse in northwest Denver, Berger said the $100,000 CiCi is poised to turn a CO2 waste stream into a commodity that craft brewers can sell to cannabis firms, restaurants and tap rooms.

Cleaner than gas purchased from industrial sources, which contains volatile organic compounds, the CO2 from the CiCi made a perceptible difference in taste, he said. It’s also affordable for smaller brewers — their larger peers recover carbon with technology that costs millions of dollars.

“Economically it makes sense,” Berger said. “We saw almost 40 % growth in 2019 and now we’re trying to do right by our community and the environment.”

Berger lifted an industrial plastic tube that carries CO2 from fermentation tanks into a dryer, where water separates from the gas. Next, the gas flowed into the CiCi, through a carbon filter and was chilled to liquid stored in a tank bound for the Clinic.