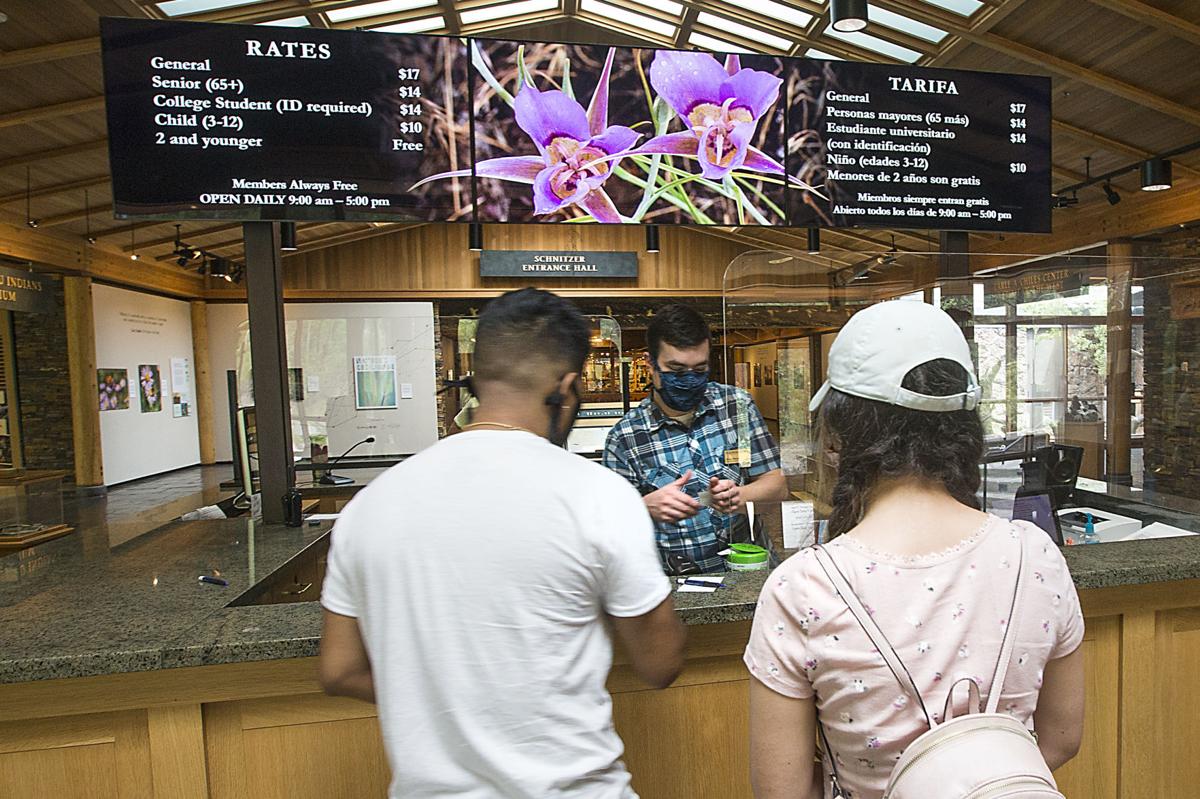 Brian Hoover, an employee at the High Desert Museum, checks in a pair of visitors while working the front desk at the museum on Wednesday, June 24, 2020. 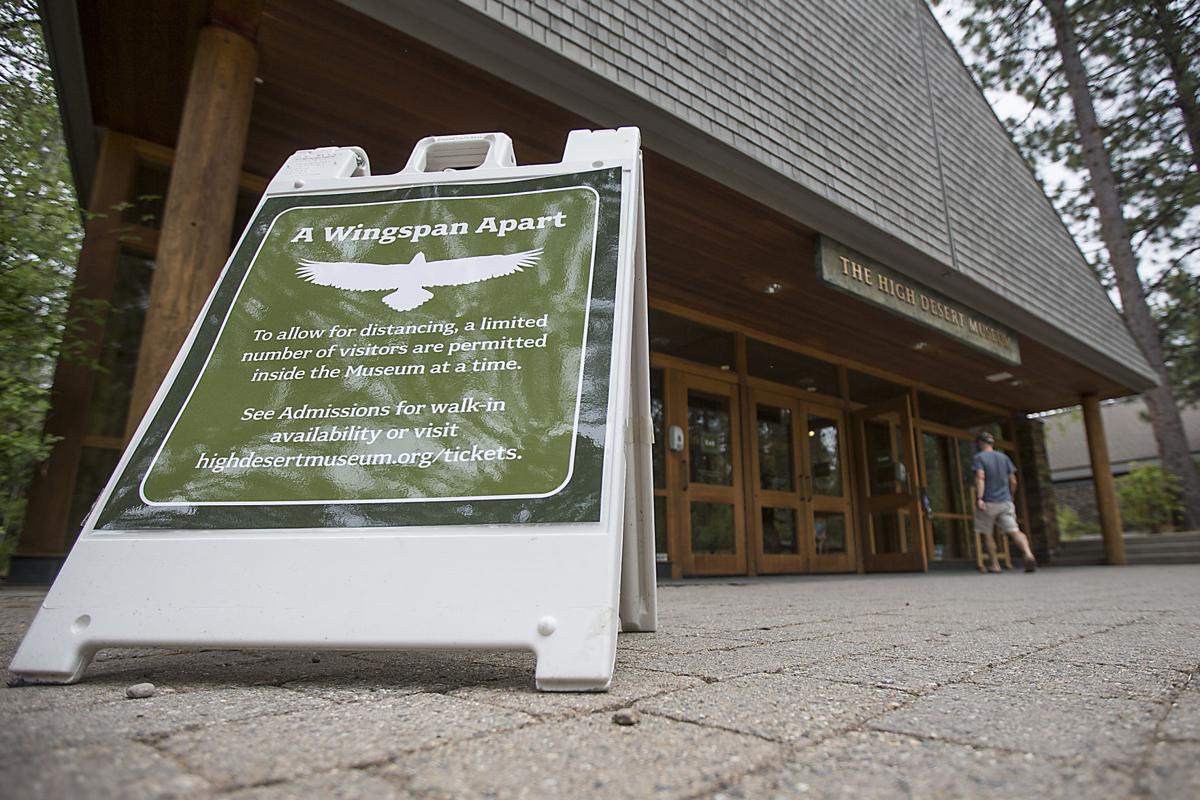 A sign placed out front of the High Desert Museum reminds visitors to keep a safe distance apart from each other while visiting the museum. 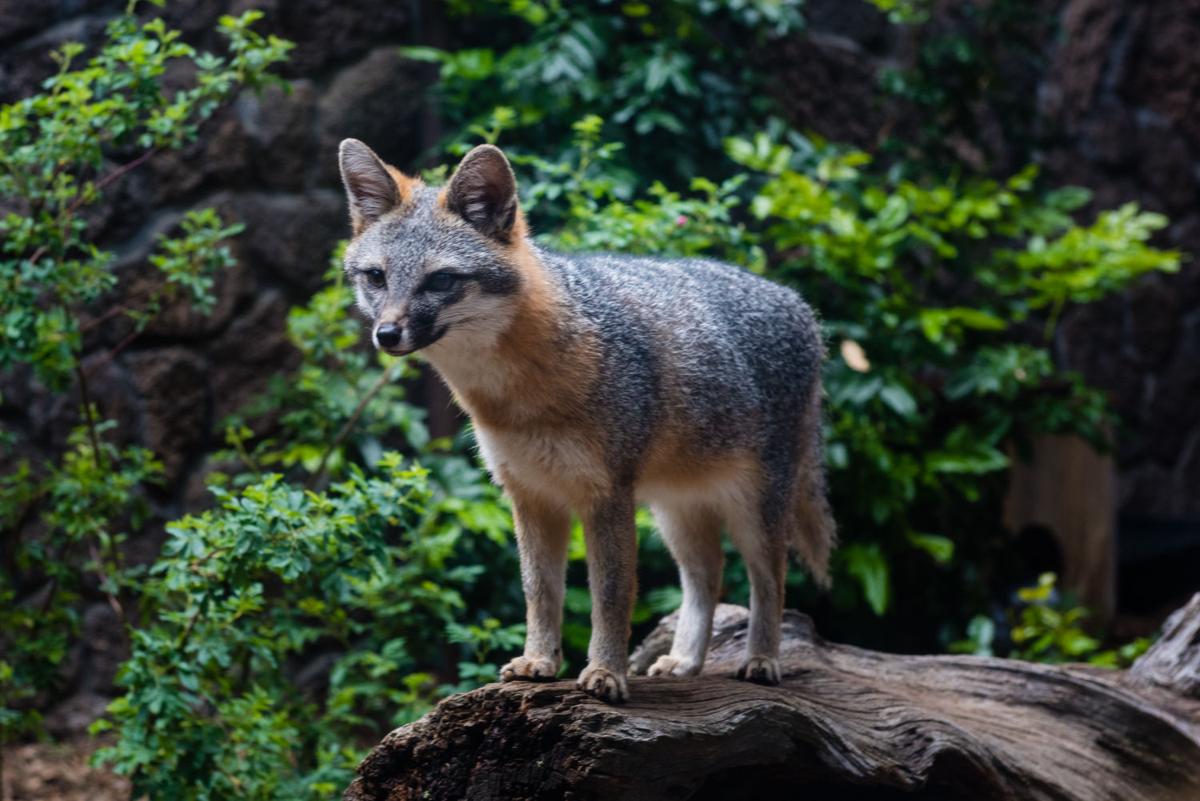 The gray fox, yet unnamed, is a female that is believed to be less than a year old. She arrived at the High Desert Museum from southwestern Oregon during the Museum's closure. She is unable to survive in the wild because she’d sustained a hip injury that required surgery and is habituated to humans. Her habitat at the Museum has been specially designed to suit a gray fox, including a below-ground view burrow and logs to climb. Visitors had the opportunity to see her for the first time when the Museum reopened June 17. 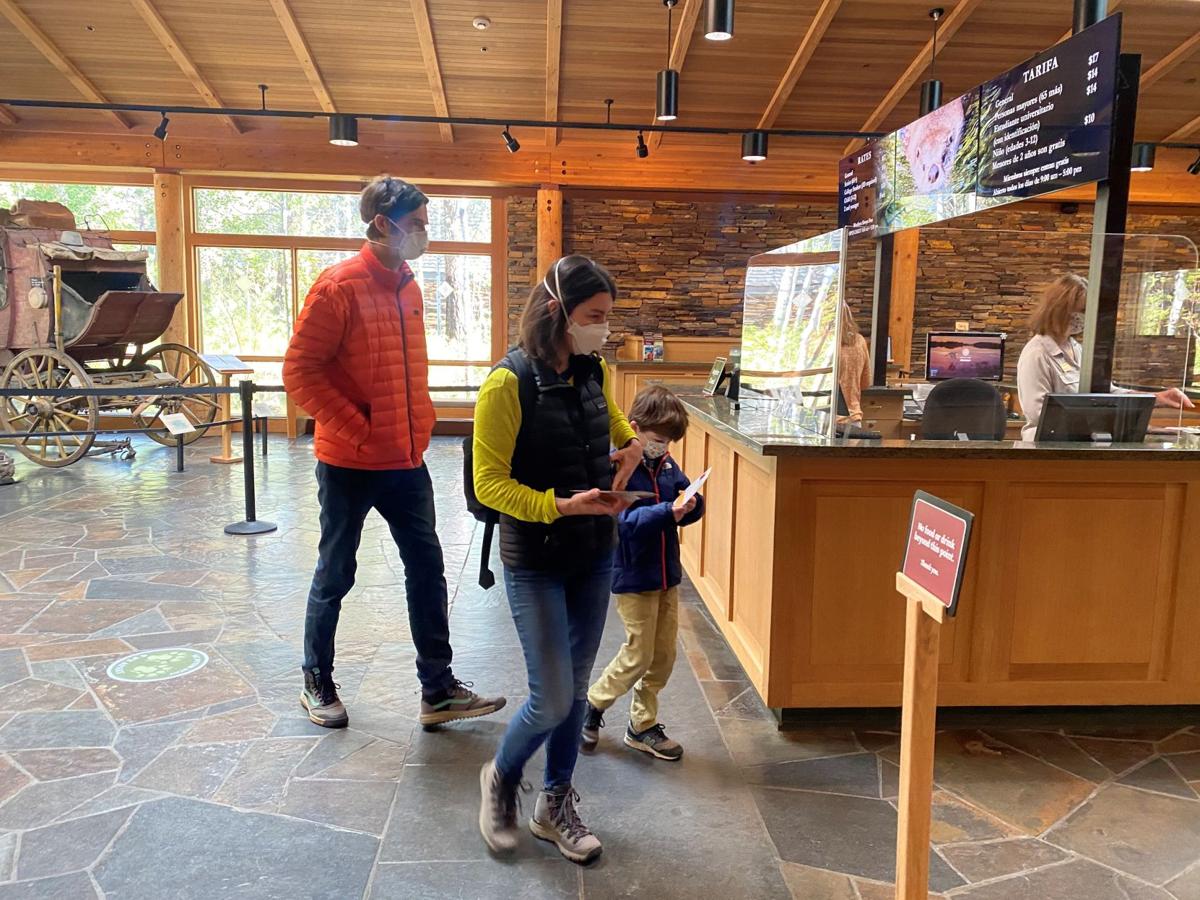 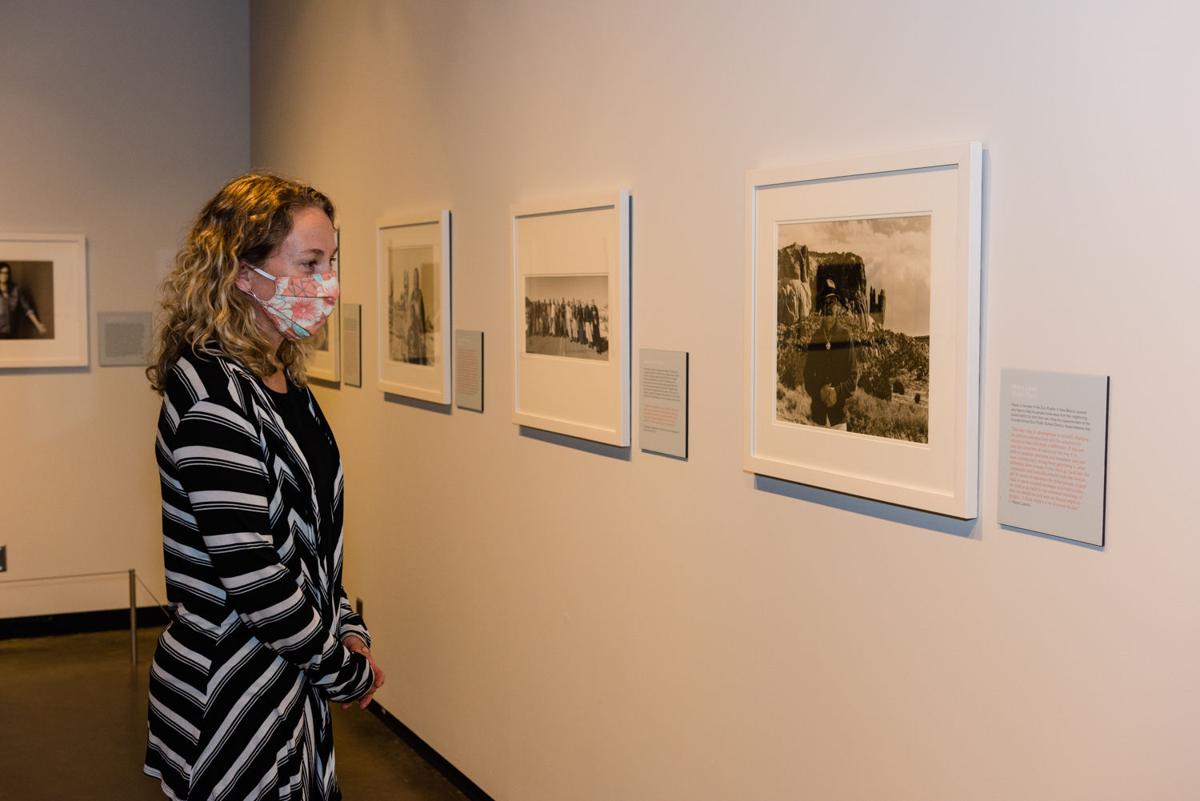 A visitor to the High Desert Museum explores an exhibit after it reopened on June 17.

Brian Hoover, an employee at the High Desert Museum, checks in a pair of visitors while working the front desk at the museum on Wednesday, June 24, 2020.

A sign placed out front of the High Desert Museum reminds visitors to keep a safe distance apart from each other while visiting the museum.

The gray fox, yet unnamed, is a female that is believed to be less than a year old. She arrived at the High Desert Museum from southwestern Oregon during the Museum's closure. She is unable to survive in the wild because she’d sustained a hip injury that required surgery and is habituated to humans. Her habitat at the Museum has been specially designed to suit a gray fox, including a below-ground view burrow and logs to climb. Visitors had the opportunity to see her for the first time when the Museum reopened June 17.

A visitor to the High Desert Museum explores an exhibit after it reopened on June 17.

A pandemic, financial crisis, nationwide social unrest and a presidential campaign have made 2020 a year for history books. Some Central Oregon museums are taking this time to record the momentous year, even when faced with unprecedented challenges.

The High Desert Museum and Deschutes Historical Museum, both in Deschutes County, have continued to record these historic events for future generations. And they have managed to do it with virtually no gate receipts.

Museum closures caused by the COVID-19 lockdown ended ticket sales, forcing museums across the country to fall back on donor support, grant funding and federal loans to make it through the lean times. Central Oregon’s museums survived the closures with pluck, creativity and generosity. But it hasn’t been easy.

“Financially it’s not awesome,” said Kelly Cannon-Miller, executive director at the Deschutes Historical Museum in Bend. “But our members have been fantastic and some have increased their membership level.”

Cannon-Miller said the museum has also received donations during the lockdown, and a substantial donation made in 2018 has also helped.

“You cannot underestimate how powerful those kinds of gifts are,” she said.

Museum work continued during the closures, and the associated expenditures have piled up. The High Desert Museum, for example, has costs associated with feeding and caring for the 150 animals that are housed there.

Some of this region’s museums also spent the lockdown time archiving items for future exhibits. Masks and respirators may not seem unusual, but some museum staff are packing them away for displays that may occur years from now.

We are “collecting stories and objects that our curators will need in 100 years to create a 2020 pandemic exhibition in the High Desert,” said Dana Whitelaw, executive director at the High Desert Museum.

“The combination of a depression, a pandemic and a civil rights movement happening all at once, … there is so much museum work that needs to be happening right now, and our curators are working on that,” said Whitelaw.

Whitelaw said her museum lost $1 million in revenue during the three-month closure. No patrons means not only no ticket sales, but also losses at the cafe and gift shop.

The museum, which reopened June 17, did secure a Paycheck Protection Program loan from the U.S. Small Business Association to help pay worker’s salaries. It also received a $200,000 grant through the CARES Act through the National Endowment for the Humanities.

Whitelaw anticipates a downturn in attendance for at least a year. One-third of High Desert Museum patrons come out-of-state, and another third visit from the Willamette Valley and Portland. As Bend is not encouraging visitors at this time, fewer people are expected to visit the area’s attractions. Social distancing measures also mean fewer patrons are allowed in the museum at any given time.

But Whitelaw said the museum’s range of revenue streams — including donations, memberships, grants and sponsorships — make it well-positioned to deal with the expected revenue losses. The museum has 5,000 members, 300 donors and seven federal grants.

“We will be OK operating on 50% of our revenue,” said Whitelaw. “We are looking at this with a long-term lens, operating at a lower budget model for 12 to 24 months.”

In downtown Bend, the Deschutes Historical Museum lost around $10,000 in expected revenue this year from the COVID-19 shutdown, said Cannon-Miller. But the museum survived the lockdown period with help from a PPP loan, plus donor support.

Although its doors have been closed, work continued inside, and a medical display has been reconfigured to reflect recent events. Museum staff also continue to field records requests.

“We have still been busy behind the scenes,” said Cannon-Miller. “Information requests have stayed the same if not increased, as people have been home working on stuff.”

The museum is set to reopen June 30 on a timed entry system. Visitors will be required to wear a mask while touring the building.

A $179,000 donation to the museum given two years ago has proven especially helpful this year, said Cannon-Miller. Longtime Bend resident Shirley Ray, who passed away in 2018, made the donation.

“It would be a different situation for us five years ago if we didn’t have those gifts in the bank to rely upon,” said Cannon-Miller. “Our members and these gifts should help us weather this for the next year.”

Grants from Oregon Community Foundation, which had been set aside for specific projects, can now be used for general operating expenditures, said Cannon-Miller.

“I have been prepping my board that we are going to be in the red, knowing that we will have to draw on our savings to get through the year,” said Cannon-Miller.

A somewhat different situation exists at the Museum at Warm Springs, which employs 11 people and serves to describe the history and culture of the Confederated Tribes of Warm Springs.

While gate receipts are an important source of revenue for the museum, the revenue stream also includes fundraising dinners and special events. The coronavirus has canceled such events for the foreseeable future. A dinner scheduled for autumn, which raised $107,000 last year, won’t happen in 2020.

“It’s not going well: We haven’t made admissions and we won’t be able to do our fundraisers,” said Elizabeth Woody, the museum’s executive director. “That has caused the loss of a great deal of revenue so far this year.”

Only 10 patrons will be allowed inside the museum at a time when it reopens July 7. Masks will be required and hand sanitizer will be offered during the visit.

In addition to the fundraisers, Woody said the museum usually raises cash through interpretive tours, another source of revenue that isn’t happening due to a coronavirus outbreak at the reservation.

“Most (patrons) want to come and have someone talk to them, that is a key revenue source,” said Woody. “So schools aren’t coming, tourists aren’t coming, arts councils are not coming. We could have virtual tours but it’s not happening yet.”

Woody said the museum did get some PPP money and grant money, plus support from the Warm Springs Tribal Council, but the museum is trying to also create a stream of revenue to make up for overall losses. One option includes digitizing photos and then offering them to public and private institutions.

“We have 5,000 photographs that need to be digitized,” said Woody. “That is also a source of revenue, for people who need archival photos. So you become a little publishing house in a sense.”

“We are looking at doing more education programs,” said Woody. “The museum was created to educate and tell people about our history. We have lots of archived material, and we have a mandate to protect them for the tribe.”

Museum staff is also eager to get back to work, said Woody.

“We are happy to be able to open up; not having visitors was really hard for us,” she said. “We also missed each other. It’s been bleak for people who are very sociable.”