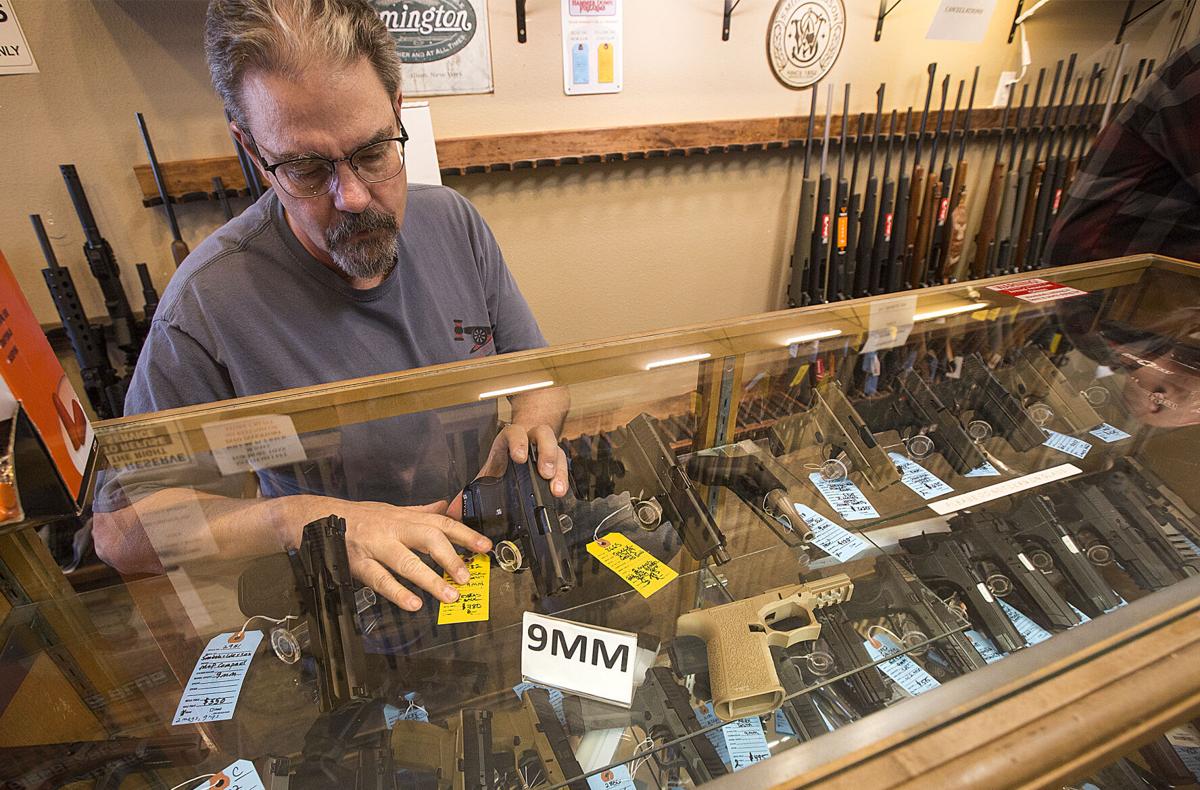 Scott Wyke, owner of Hammer Down Firearms in Bend,

s a case of guns Friday while working at his store 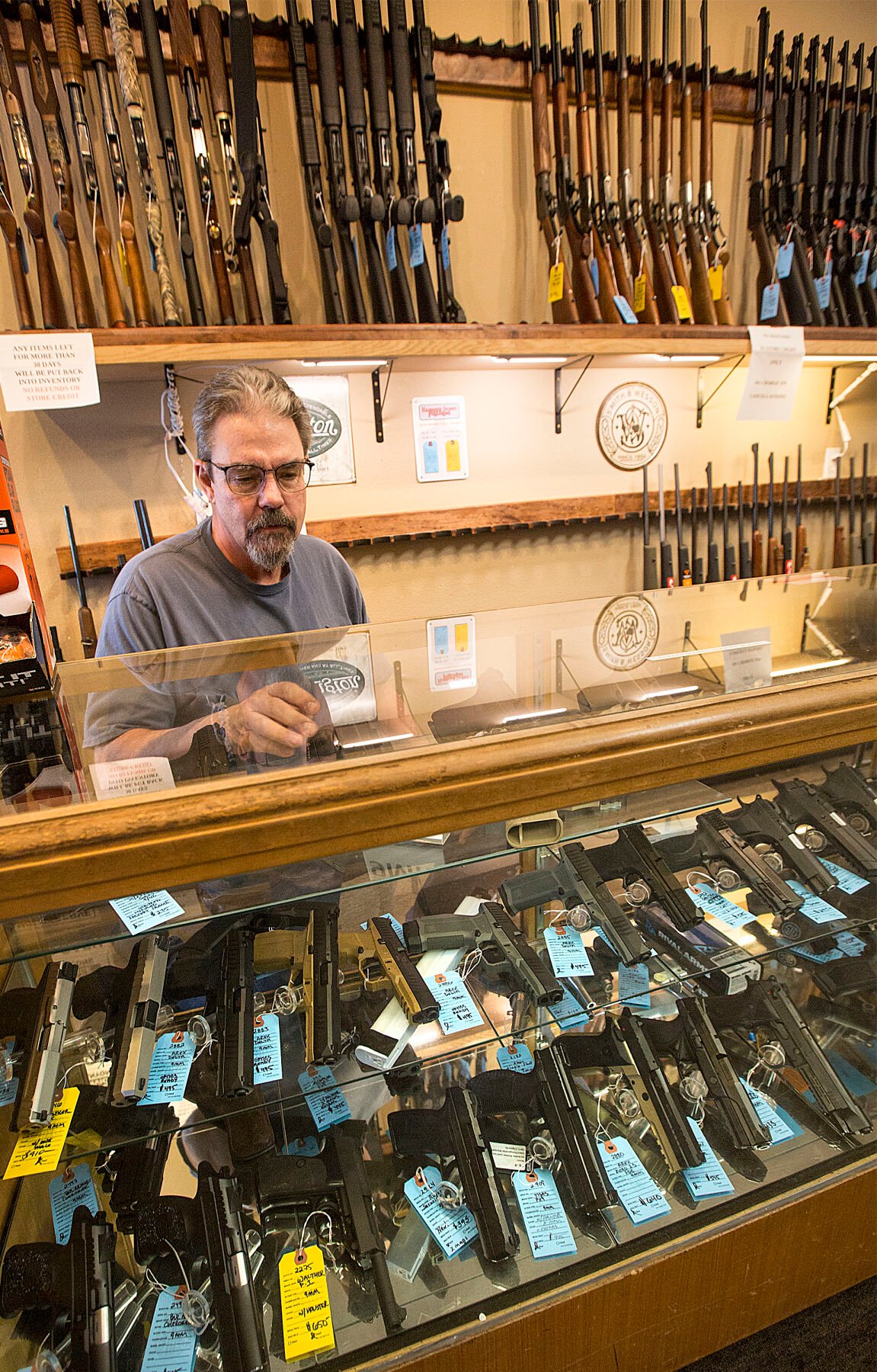 Scott Wyke, owner of Hammer Down Firearms in Bend, straightens a case of guns while working at his store.

Scott Wyke, owner of Hammer Down Firearms in Bend,

s a case of guns Friday while working at his store

Scott Wyke, owner of Hammer Down Firearms in Bend, straightens a case of guns while working at his store.

While Guntraders in Redmond sells mostly collectible guns, owner Jerry Koch said that isn’t stopping customers from flocking to his shop in search of a firearm. They’re coming out of fear, Koch said. Customers are fearful of the protests they’ve seen on television, in Portland and across the country.

“I pray for America,” Koch said. “At the start of the pandemic, they came in and we were busy. They were scared then, too. But once the riots started, they started climbing again.”

The pandemic and protests have made 2020 a banner year for gun sales in Oregon, according to the National Instant Criminal Background Check System, which tracks criminal background checks of gun applicants.

Jefferson County District Attorney Steven Leriche said he was not aware of increased crime being associated with increased firearm sales. But he did say there is a correlation between drug and alcohol use and gun ownership and serious crimes.

“Guns themselves are generally not my worry,” Leriche said. “The combination of drugs being plentiful and guns being plentiful, that’s a worry. We’ve had five murders so far and at least two involve a firearm.”

Jefferson County Sheriff Jim Adkins said he preferred to have an armed citizenry, as it is difficult sometimes to get to someone in need and they can help themselves.

“Police cannot always be there at the moment they are needed most,” Adkins said. “I always encourage citizens to be more self-reliant.

“Everyone should be prepared with food, water, warmth and self-defense, so they can handle any emergency on their own until help arrives. Sometimes help can be pretty slow. Especially a life-threatening event.”

In Bend, at Hammer Down Firearms, not only are firearms selling rapidly, so is ammunition, said owner Scott Wyke. He agreed with Koch that customers are coming into the store looking for protection because of the recent civil unrest.

For months, protests persisted in Portland that were mostly peaceful. A march drawing several hundred was held in May in downtown Bend to protest the killing of George Floyd, who died after a Minneapolis police officer kneeled on his neck. The protest was held in conjunction with a nationwide movement that sparked violence in some cities, including Portland and Eugene.

“All the riots started it,” Wyke said. “Now it’s the Democrats saying they’re going to take our guns away and people are purchasing now. Ammunition is in short supply now.”

Combined with demand are ammunition plant shutdowns or slowdowns caused by efforts to control the spread of the COVID-19 virus.

“Sales have been higher than I expected and it’s mostly coming from first-time buyers,” he said.

I love the thought of all my armed and afraid neighbors. I have never been in a situation where a gun would have made things better. We are becoming more tribal, less secure and the merchant kings of war and woe are laughing all the way to the bank.

And what are some of your "experiences", please?

Have you ever been a victim of a violent crime?

Ever had your home broken into while you were there?

Ever broke down on the side of a quiet roadway, at night, between Portland and Bend? With your family with you?

Nonsense, OSP. "Near hits"? The problem is and always has been the surge in sales outstrips OSP's limited staffing to process the computer generated application. Last week alone the wait time was 3-5 days (7000 plus backlog) due to no increase in trained staffing to do the necessary data input.

Also, most of the many firearms being sold, at least in Central Oregon, are to first time buyers of all political affiliation. Scared? Yes. And rightly so.

Ammunition sales are off the charts with many dealers only allowing for one box of ammo to be purchased per customer.

It would be a very interesting metric to know how many "liberal", anti-gun voices in Central Oregon own, or have recently purchased, a firearm. How many of these have or have applied for concealed handgun permits?

It's also just logical to buy a gun. I still think Oregon is largely safe for the entire skin tone spectrum. The "mostly peaceful" protests and rioting, where they tried to burn cops in a precinct building and Mayor Ted Wheeler's building, leads me to value the 2A and citizens should provide for their own defense. That's the clear subtext to "mostly peaceful protests". I now have a nice reliable, subcompact set up, an appointment to get my concealed carry license and a couple more months before to receive a shipment of large box of ammunition. I then plan to shoot most of that box for practice and buy another 1000 round box. I now consider this part of my lifestyle and a fun hobby. It's amazing how much detail goes into pistol design and how a cartridge is loaded: you need different combos for different situations. Thanks BLM/antifa for showing me the light and error of my ways. Now I just have to learn the language of "Double speak" the left seems to specialize in.