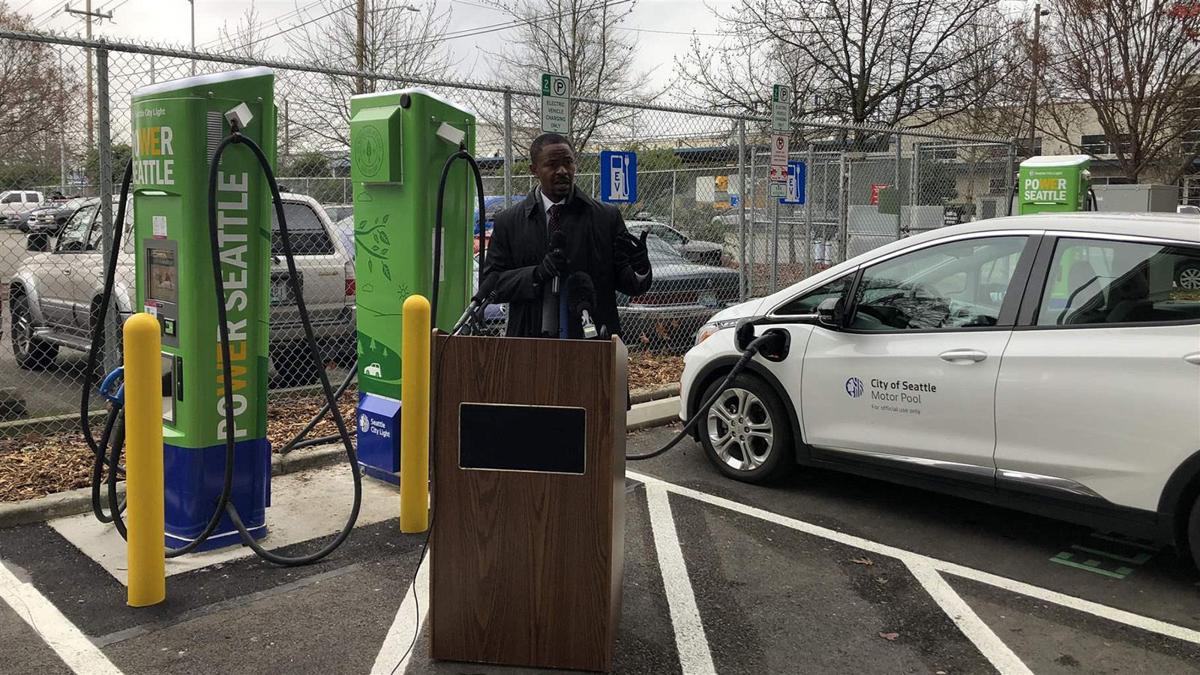 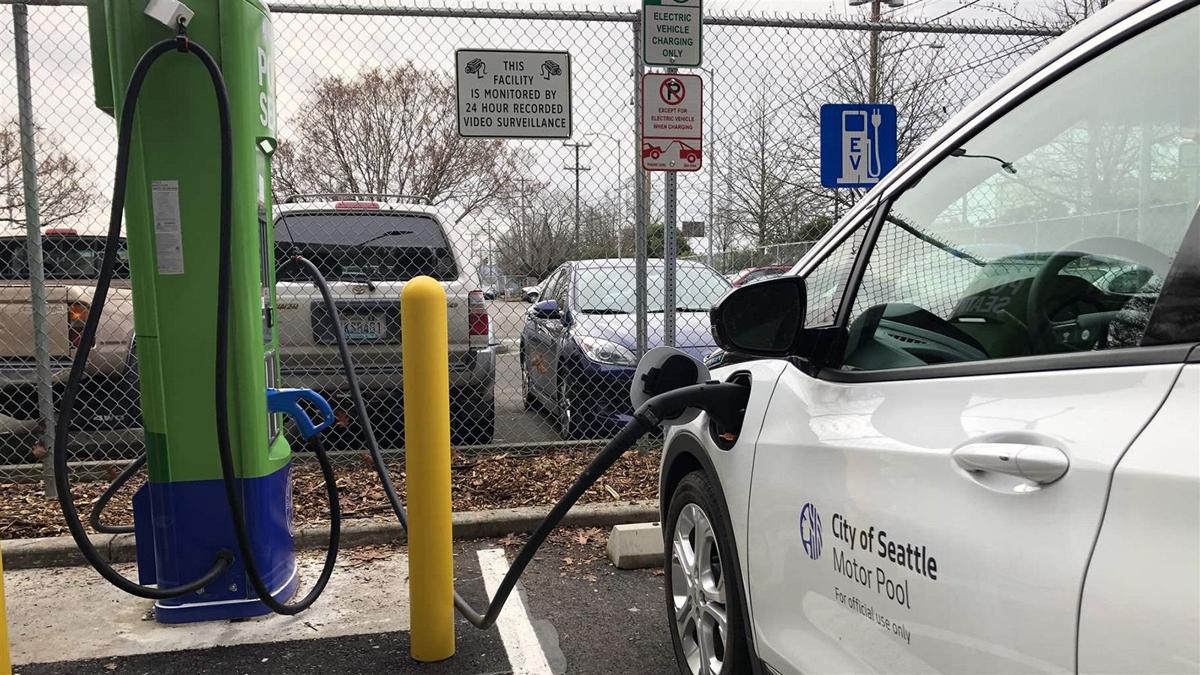 A Seattle City Light vehicle charges at one of the utility’s new electric vehicle charging stations in the city's SoDo neighborhood.

A Seattle City Light vehicle charges at one of the utility’s new electric vehicle charging stations in the city's SoDo neighborhood.

When Seattle City Light unveiled five new electric vehicle charging stations last month in an industrial neighborhood south of downtown, the electric utility wasn’t just offering a new spot for drivers to fuel up. It also was creating a way for the utility to figure out how much more power it might need as electric vehicles catch on.

Seattle aims to have nearly a third of its residents driving electric vehicles by 2030. Washington state is No. 3 in the nation in per-capita adoption of plug-in cars, behind California and Hawaii. But as Washington and other states urge their residents to buy electric vehicles — a crucial component of efforts to reduce carbon emissions — they also need to make sure the electric grid can handle it.

A U.S. Department of Energy study found that increased electrification across all sectors of the economy could boost national consumption by as much as 38% by 2050, in large part because of electric vehicles. The environmental benefit of electric cars depends on the electricity being generated by renewables.

So far, states predict they will be able to sufficiently boost power production. But whether electric vehicles will become an asset or a liability to the grid largely depends on when drivers charge their cars.

Electricity demand fluctuates throughout the day; demand is higher during daytime hours, peaking in the early evening. If many people buy electric vehicles and mostly try to charge right when they get home from work — as many currently do — the system could get overloaded or force utilities to deliver more electricity than they’re currently capable of producing.

In California, for example, the worry is not so much with the state’s overall power capacity, but rather with the ability to quickly ramp up production when demand is high, said Sandy Louey, media relations manager for the California Energy Commission, in an email. About 150,000 electric vehicles were sold in California in 2018 — 8% of all state car sales.

The state projects that electric vehicles will consume 5.4% of the state’s electricity, or 17,000 gigawatt-hours, by 2030.

Responding to the growth in electric vehicles will present unique challenges for each state. A team of researchers from the University of Texas at Austin estimated the amount of electricity that would be required if every car on the road transitioned to electric. Wyoming, for instance, would need to nudge up its electricity production only 17%, while Maine would have to produce 55% more.

A November report sponsored by the U.S. Department of Energy found that there has been almost no increase in electricity demand nationwide over the past 10 years, while capacity has grown an average of 12 gigawatts per year. 1 GW can power more than half a million homes. That means energy production could climb at a similar rate and still meet even the most aggressive increase in electric vehicles, with proper planning.

Charging during off-peak hours would not only allow many electric vehicles to be added to the roads, but also allow utilities to get more use out of power plants that currently run only during the limited peak times.

Seattle City Light and others are looking at various ways to promote charging during ideal times. One method is time-of-day rates. For the Seattle chargers unveiled last month, users will pay 31 cents per kWh during peak daytime hours and 17 cents during off-peak hours. The utility will monitor use at its charging stations to see how effective the rates are at shifting charging to more favorable times.

The utility also is working on a pilot program to study charging behavior at home. And it’s partnering with customers such as King County Metro that are electrifying large vehicle fleets to make sure they have both the infrastructure and charging patterns to integrate smoothly.

Instead, he said, the utility is working with customers to see whether they can use existing assets without the need for additional investment.

One of those solutions is smart charging, a system in which vehicles are plugged in but don’t charge until they receive a signal from the grid that demand has tapered off a sufficient amount. This is often paired with a lower rate for drivers who use it. Several smart charging pilot programs are being conducted by utilities, though it has not yet been phased in widely.

Utility officials say the technology will be ready by the time widespread purchases of electric vehicles make it necessary.

In many places, the increased electricity demand from electric vehicles is seen as a benefit to utilities and ratepayers. In the Northwest, electricity consumption has remained relatively stagnant since 2000, despite robust population growth and development. That’s because increasing urbanization and building efficiency have driven down electricity needs.

“Having EV loads is welcome, because it’s environmentally cleaner and helps sustain revenues for utilities,” said Massoud Jourabchi, manager of economic analysis for the Northwest Power and Conservation Council, which develops power plans for the region.

In California, electric cars may provide a market for surplus renewable energy production when demand is low. Pacific Gas & Electric, the nation’s largest utility, is working to install 7,500 chargers in its service area.

Many in the utility community are excited about the potential for electric cars to serve as battery storage for the grid. Vehicle-to-grid technology, known as V2G, would allow cars charging during the day to take on surplus power from renewable energy sources.

Then, during peak demand times, electric vehicles would return some of that stored energy to the grid. As demand tapers off in the evening, the cars would be able to recharge.

V2G could be especially beneficial if used by heavy-duty fleets, such as school buses or utility vehicles. Those fleets would have substantial battery storage and long periods where they’re idle, such as evenings and weekends .