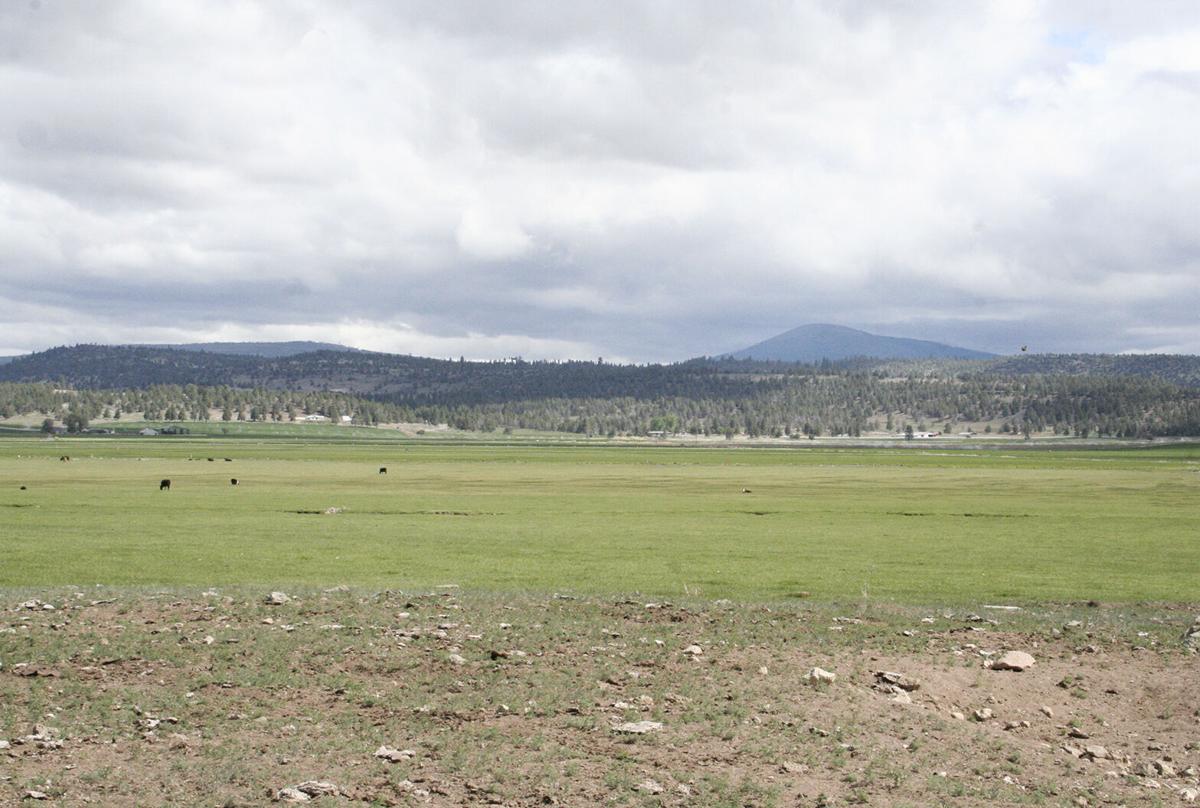 Cattle graze in a field near Bonanza in Klamath County, where a 2,700-acre solar facility has been proposed. Neighbors oppose those project for taking irrigated farmland out of production, among other issues. 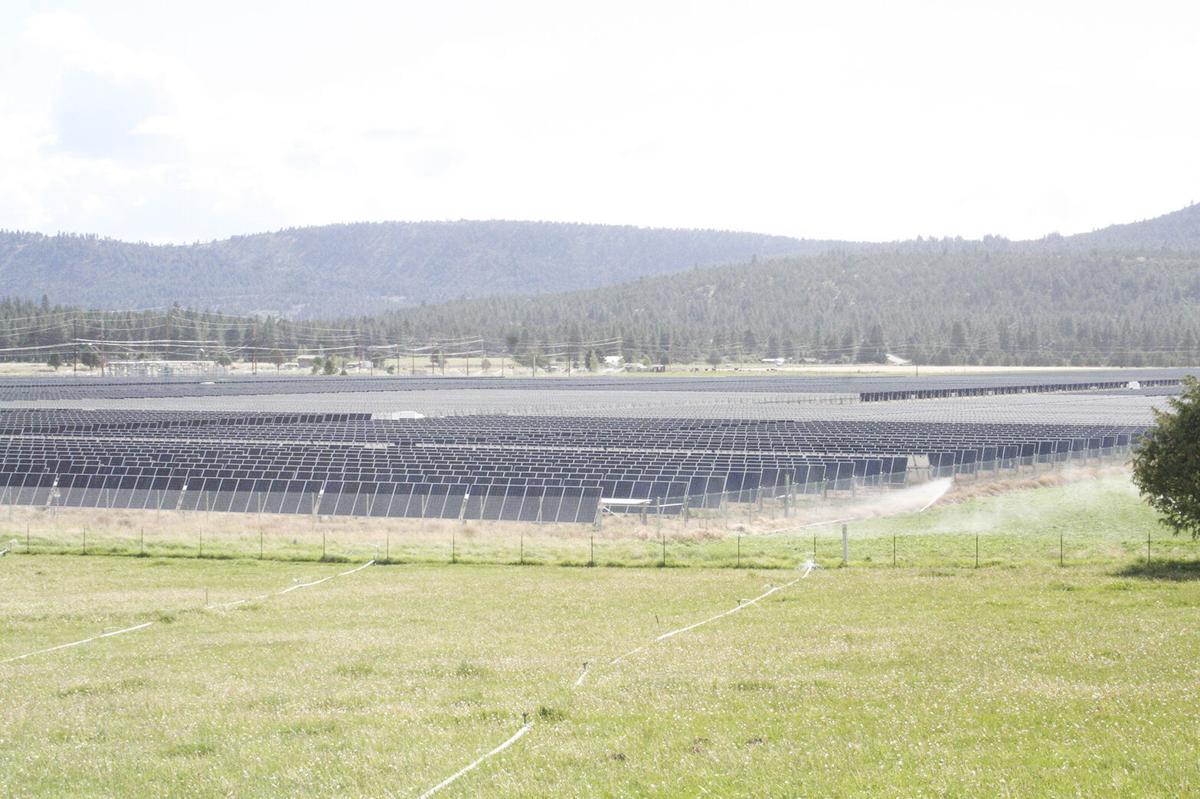 The Woodline Solar Project, developed by Pine Gate Renewables, is a solar facility that’s already been constructed in Klamath County. Suitable conditions can encourage clusters of such projects, experts say. 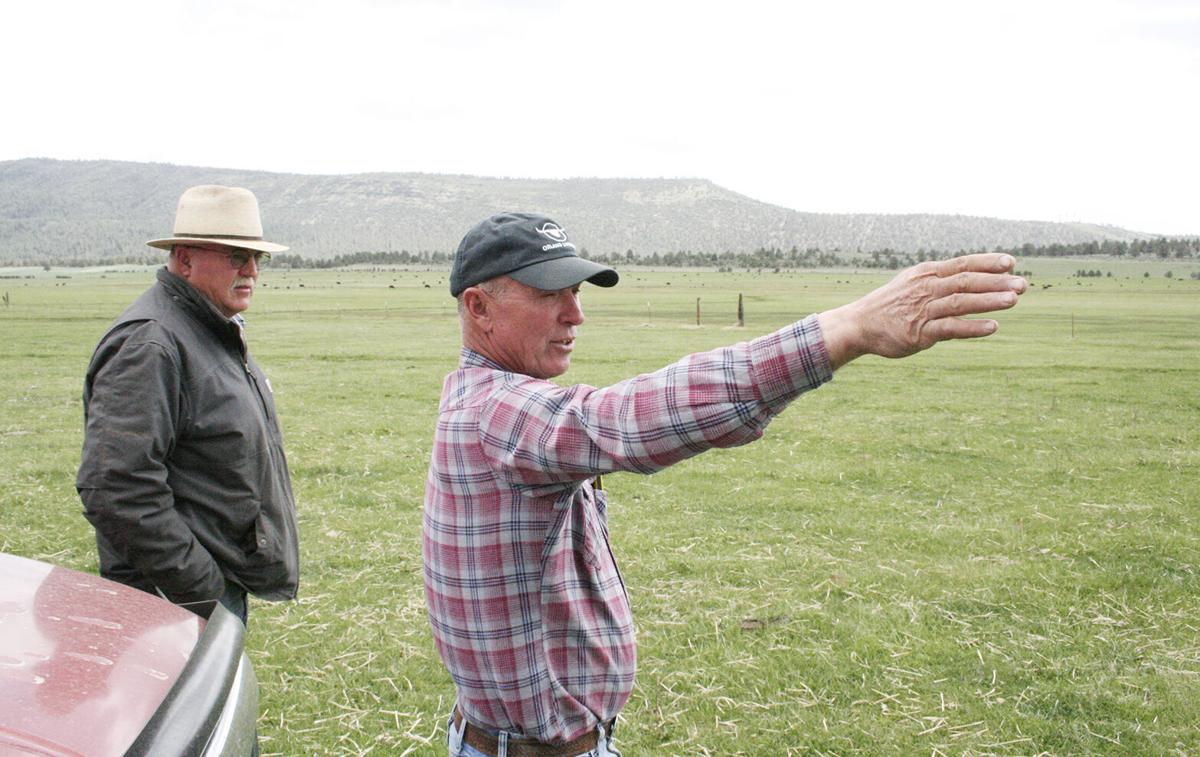 Dave Noble, left, and Greg Thomas look out onto a neighboring field where a 2,700-acre solar facility is proposed near Bonanza in Klamath County. Neighbors oppose the project because it will take irrigated farmland out of production. 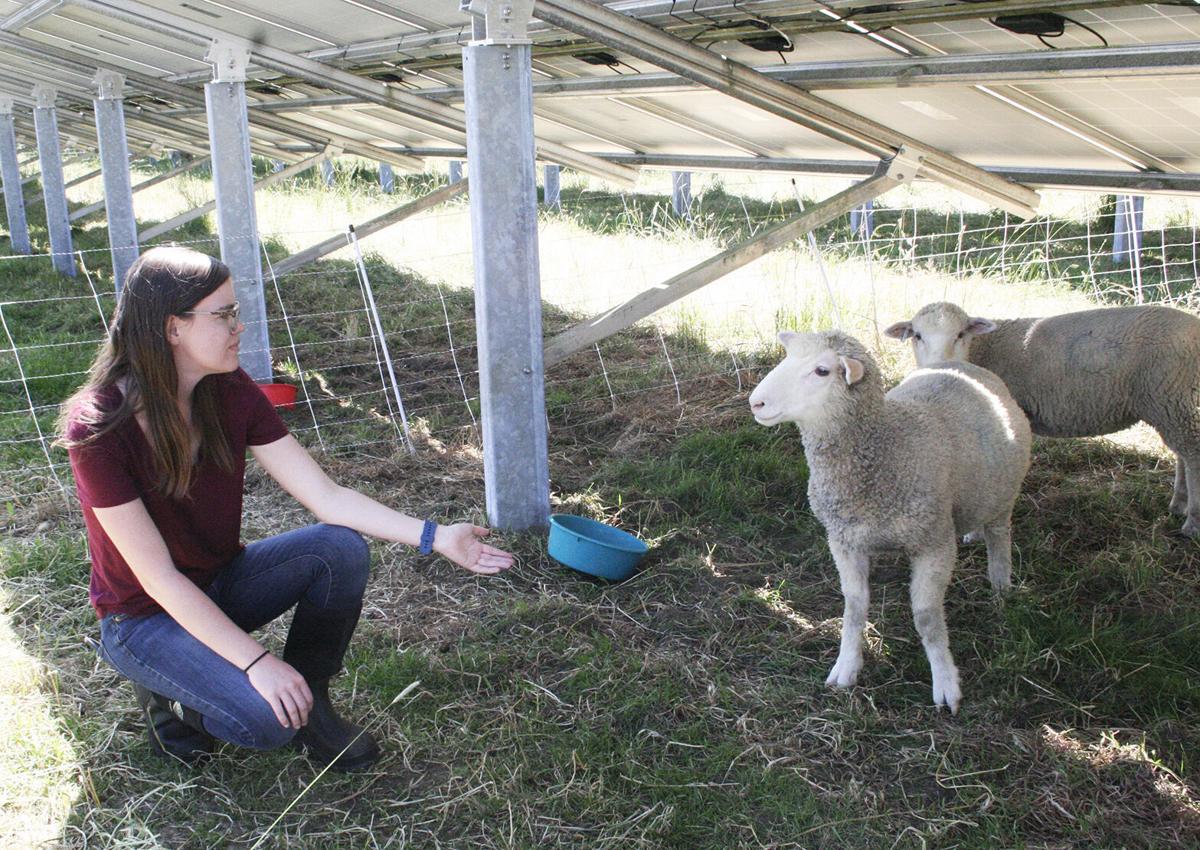 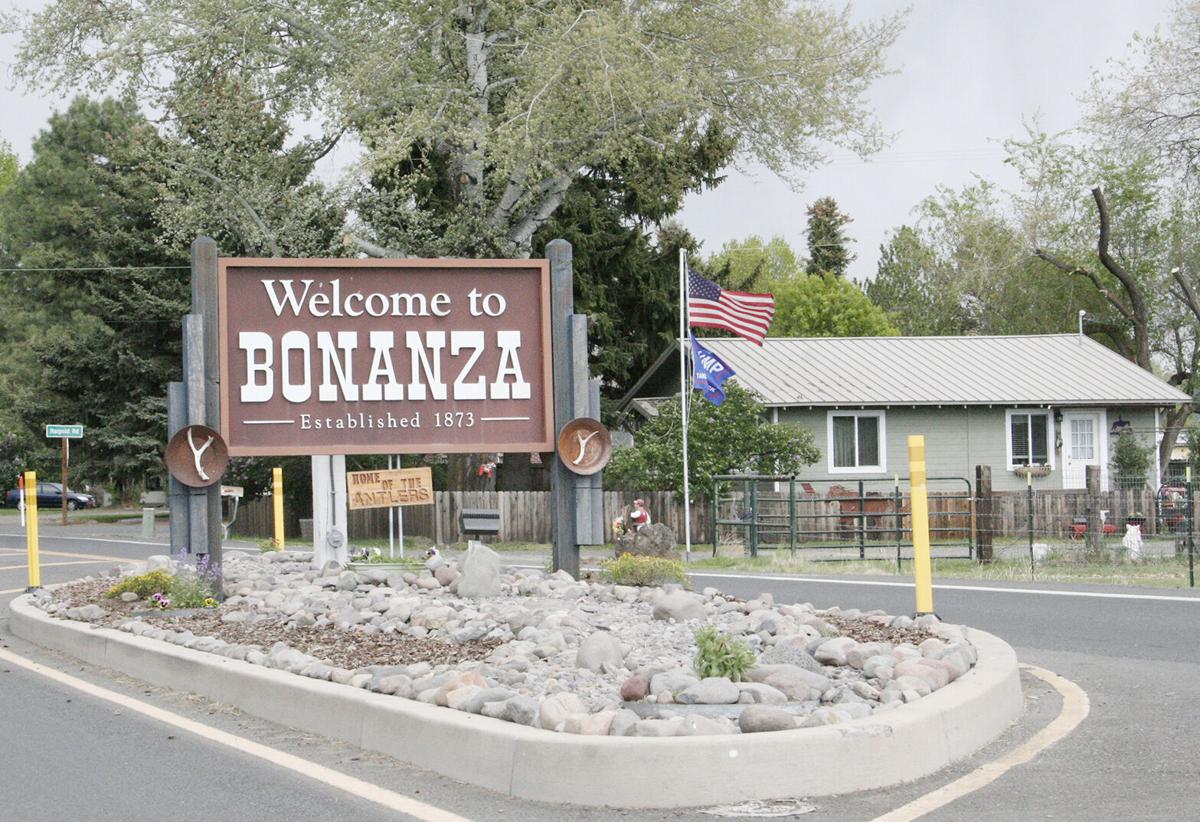 A sign welcomes visitors to Bonanza in Klamath County. A 2,700-acre solar facility has been proposed by developer Hecate Energy near Bonanza. 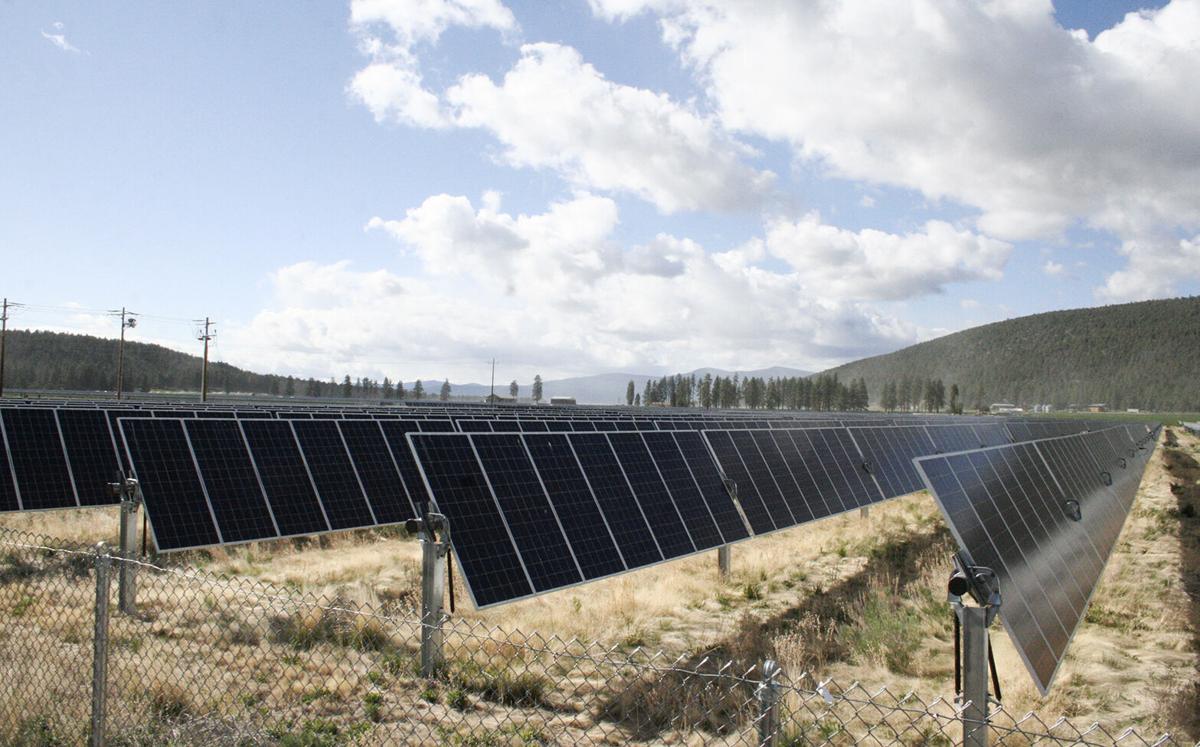 An array of solar panels can be seen in this file photo.

Cattle graze in a field near Bonanza in Klamath County, where a 2,700-acre solar facility has been proposed. Neighbors oppose those project for taking irrigated farmland out of production, among other issues.

The Woodline Solar Project, developed by Pine Gate Renewables, is a solar facility that’s already been constructed in Klamath County. Suitable conditions can encourage clusters of such projects, experts say.

Dave Noble, left, and Greg Thomas look out onto a neighboring field where a 2,700-acre solar facility is proposed near Bonanza in Klamath County. Neighbors oppose the project because it will take irrigated farmland out of production.

A sign welcomes visitors to Bonanza in Klamath County. A 2,700-acre solar facility has been proposed by developer Hecate Energy near Bonanza.

An array of solar panels can be seen in this file photo.

BONANZA — Nobody is against solar energy — at least, not in theory.

Solar power is often cast in a positive light until a specific site is chosen for a facility.

At that point, the proposed development can seem like a dark force to neighbors who fear the unsightly transformation of their familiar landscape.

“What’s it going to do to my property values when I’m right next to it?” asked Greg Thomas, whose farm abuts a proposed 2,733-acre solar project near Bonanza in Klamath County.

“All our property values are going to go in the toilet. Nobody wants to live next to a power plant,” answered Tonya Pinckney, another neighbor opposed to the facility planned by developer Hecate Energy.

Local hostility to solar facilities isn’t just a knee-jerk “not in my backyard” sentiment in Oregon, a state known for its rigorous protections against converting farmland to other uses.

Opponents of solar facilities are often strongly motivated by concern for the agricultural economy, which can permanently suffer if irrigated acres such as those within the Bonanza project are developed.

“Why do we have zoning laws?” Pinckney asked. “If it’s zoned for ag, how can they just take it out?”

About 600 acres of the project are irrigated and half the associated water rights can’t be transferred elsewhere due to a lack of available farmland, meaning that capacity could be lost forever, said Dave Noble, a local farmer.

“That is some top-notch farm ground for this area,” he said.

Aside from preserving agriculture, Oregon strives to be a leader in promoting renewable energy to reduce carbon emissions and fight climate change.

Those two objectives are bound to clash as solar energy production takes off in the state, propelled by economic forces as the technology becomes less expensive to manufacture and install.

While it’s long been boosted by tax credits, renewable portfolio mandates and other government incentives, the solar power industry has now found its financial footing and is expanding due to demand from utility companies, experts say.

“The market is driving the boom,” said Mark Zwieg, Hecate Energy’s development manager in charge of the Bonanza project and other proposals. “Our cost of materials is going down every year.”

A megawatt of solar power capacity requires about 5 to 10 acres and costs about $780,000 to $910,000 to install at the utility scale, depending on the technology.

The Bonanza project alone is projected to increase Oregon’s solar capacity by 150-300 megawatts, depending on the configuration of the final design.

“You may start seeing clusters of solar facilities in one area because of those attributes,” Zwieg said.

Resistance from surrounding landowners is a less tangible but very real impediment to developing a solar facility.

Hecate Energy is still conducting its due diligence on the Bonanza site, which was chosen partly because a natural gas facility was approved there by Oregon’s Energy Facility Siting Council nearly 20 years ago.

The many objections to the project — including the loss of irrigated land, wildlife habitat and cultural heritage — will be worked through as the company discusses the details with stakeholders, Zwieg said.

“We want to be good neighbors. We want to minimize our impacts,” he said. “You don’t want to look at all the projects the same. Your approach to opposition needs to evolve with each project.”

Even so, the controversies repeatedly encountered by solar projects in Oregon have taken a toll on the industry, experts say.

Unless Oregon comes up with a way to make the public more comfortable with solar projects, it will be difficult or even impossible to build new facilities in the state, he said.

“I don’t think we’re there yet. We’re at this flashpoint,” he said. “It’s a sign we need to do something to get people together and figure this out.”

Battles over large-scale facilities occur before the Energy Facility Siting Council, whose decisions can be appealed directly to the state’s Supreme Court.

Smaller projects approved by county governments are challenged before the state’s Land Use Board of Appeals, whose decisions are reviewed by the Oregon Court of Appeals.

However, the council process also has critics, such as Donnie Boyd, a Klamath County commissioner opposed to the Bonanza project.

“If the project is a certain size, they can go around the county and do whatever they want,” he said. “The EFSC (siting council) process takes out the local input. I don’t think the state government should be able to dictate to local citizens how they want their area.”

Solar projects are among the most commonly approved nonresidential uses in farm and forest zones, according to the state Department of Land Conservation and Development.

At 966 megawatts, solar capacity in Oregon grew by more than 30% in 2020 alone, according to the Solar Energy Industries Association. The industry is expected to expand by 1,646 megawatts during the next five years. A megawatt is enough to power about 190 homes for a year, according to the association.

“Solar energy development is rapidly growing in Oregon,” said the state Department of Land Conservation and Development. “Many utility scale solar facilities are opting to locate on land zoned (exclusive farm use) due to proximity to high-voltage powerlines and substations with interconnection opportunities, lower land acquisition or lease costs, availability of unobstructed sunlight, and ease of development due to flatter slopes.”

Up to 75,000 acres in Oregon could be converted to solar facilities in the next 30 years, according to the American Farmland Trust.

“I think you’re going to have local communities pushing back or at least having a say in how those projects are developed,” said Addie Candib, the group’s Pacific Northwest regional director.

The farmland preservation group 1000 Friends of Oregon would prefer that solar facilities be steered toward industrial areas, similar to the way residential subdivisions are constructed within “urban growth boundaries.”

“It’s not occurring because just like every other industry, it’s perceived as cheaper to develop farmland rather than be creative and innovative with land that’s already been developed,” said Jasmine Zimmer-Stucky, the nonprofit’s working lands engagement manager.

The Oregon Farm Bureau believes a statewide inventory or map of lands available for solar development could expedite those projects that are broadly beneficial, said Samantha Bayer, the organization’s policy counsel.

“We need to establish more certainty on the front end of where these projects should go,” she said. “There is a place for solar in the system. It just seems like a lot of the places that are cheapest for solar projects are on valuable agricultural land.”

Representatives of the solar industry say that local governments prefer industrial areas to be dedicated to facilities that generate more permanent jobs than solar projects. Mapping, meanwhile, may not recognize the complexities of siting solar arrays on specific properties.

Chad Higgins, an associate professor at Oregon State University, began studying the subject after noticing some sheep congregating under solar panels at a campus installation.

His research has determined that grass below the panels grows slower but reaches dormancy later in the season, consuming less water while extending the pasture’s productivity in summer.

The growth rate of sheep isn’t reduced if they graze beneath the panels, which they preferred to do because of the shade.

Sheep raised in open pasture will actually gaze longingly at their companions beneath solar panels and try to get past a fence to join them, said Alyssa Andrew, an OSU graduate student involved in the research.

“They seem to like it a lot,” she said. “They’re under there pretty much every time I’m here.”

Higgins is now comparing several agrivoltaic arrangements at another site, though he acknowledges the co-location strategy may face obstacles and limitations.

“Any grower who looks at an array, their first question is: How do I get a tractor in there?” he said.

Farmland preservationists say the idea is worth exploring, though they’re concerned that solar panels may permanently hinder the types of crops and equipment a property can support.

Some concepts, such as placing beehives in fields with solar facilities, have raised suspicions whether the agricultural use may simply provide a fig leaf for development.

Preventing agrivoltaics from creating such a regulatory loophole is a matter that must be decided by policy makers, Higgins said.

“I’m not an elected official,” he said. “It’s up to them to figure out for it not to become a way to skirt the rules of farm protection.”