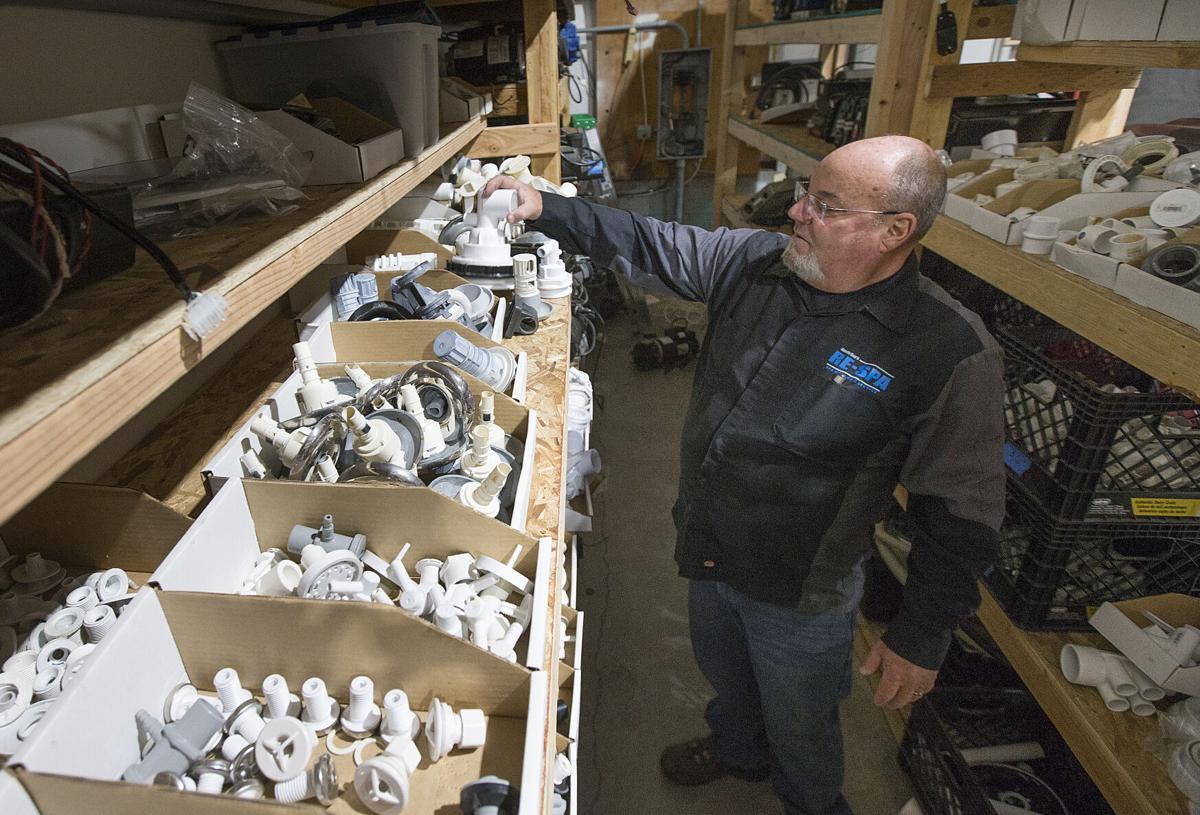 Dan Fogerty, owner of Re-Spa in Bend, looks through his inventory of salvaged jets and hot tub parts at his bend shop on Wednesday, Nov. 11, 2020. 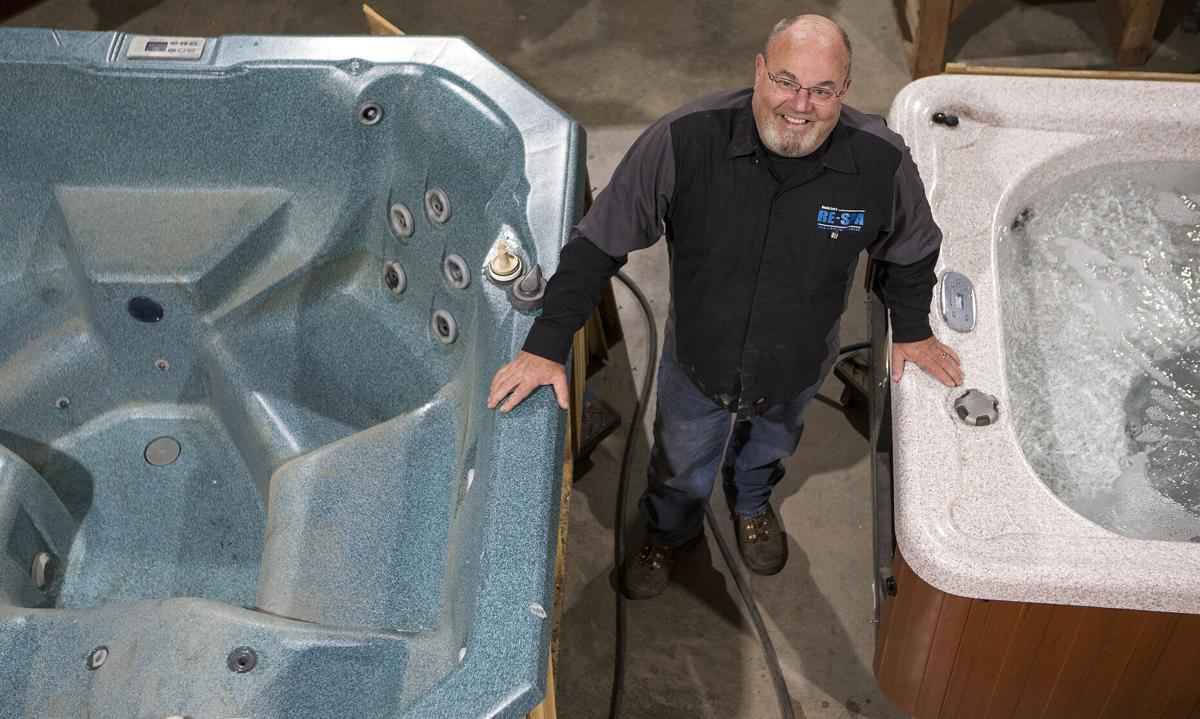 Dan Fogerty, owner of Re-Spa in Bend, stands next to a pair of hot tubs he is currently working on restoring at his Bend shop on Wednesday, Nov. 11, 2020.

Dan Fogerty, owner of Re-Spa in Bend, looks through his inventory of salvaged jets and hot tub parts at his bend shop on Wednesday, Nov. 11, 2020.

Dan Fogerty, owner of Re-Spa in Bend, stands next to a pair of hot tubs he is currently working on restoring at his Bend shop on Wednesday, Nov. 11, 2020.

When the coronavirus pandemic was spreading across the U.S. last summer, sparking lockdowns across the country, Dan Fogerty thought his business had just been upended.

As a seller of refurbished hot tubs, the longtime Bend resident saw economic stagnation ahead, which could only mean slumping hot tub sales. His concerns were compounded by a recent move to a larger workspace, which meant higher costs to shoulder during a downturn.

Fogerty, owner of Handy Dan’s Re-Spa, need not have worried. Like many winners that emerged during the pandemic — RV rentals, bike sellers, hardware suppliers — hot tub sales have been brisk. All those remote workers need a place to unwind, and amid the quarantines and social distancing measure, crowded tubs at athletic clubs have lost their appeal.

“I sold out everything, I didn’t have any spas for a while, it was unbelievable,” said Fogerty, 60. “Everyone was saying ‘we are stuck at home, we are doing our projects at home, we can’t go to the health club anymore, so we are getting a spa.’ There was a lot of that and there still is.”

Fogerty said hot tubs sales are up 30% to 40% over last year. He said some customers buy them for therapeutic reasons, others just enjoy the hot water as a way to relax.

“I wasn’t a spa guy, it seemed like something that would require a lot of maintenance and work,” said Ron Alvarez, a Bend resident and hot tub convert. “But I gotta tell you on a cold winter night when the snow is coming down and I am sitting outside in the 104-degree temperature in the spa with a glass of wine, there is no better place.”

Re-Spa specializes in refurbishing and selling used hot tubs. Keeping them out of the landfill is a priority for Fogerty, and a selling point that he prides his business on. Most of his tubs range in cost from $2,800 to $8,000. That’s a significant difference when compared to newer tubs, that average around $10,000.

Some are vintage tubs, others are high end. Occasionally there are newer models with the bells and whistles — mini waterfalls, touchscreen controls, Bluetooth, stereos and LED lights to name a few.

“The hot tub has become like a giant speaker in your backyard,” said Fogerty.

Looking back, Fogerty is still surprised that a health quarantine drove his business higher. The $1,200 stimulus checks set out during the lockdown did help a little, he said.

Alvarez, who co-hosts a morning talk show on local radio, said he is also aware of people in Bend who bought a tub during the pandemic.

“Because of the lockdown, they got a spa as something to make their life a little bit more comfortable and pleasurable, since they’re at home a lot more often,” said Alvarez.

But another factor driving sales is the surging number of out-of-state migrants moving to Bend from the Bay Area, Seattle and other West Coast cities. Californians in particular have been good customers.

“Californians are used to having in-ground pools with a spa, so when they come here one of the first things they want is a spa,” said Fogerty, who himself migrated to Central Oregon from San Diego 30 years ago.

Tobin Dresser, a sales associate at Oregon Hot Tub in Bend, agreed that a lot of the new business comes from the explosion of new homes in Central Oregon. Sales are up 50% this year at his store.

“We’ve been riding the (real estate) wave,” he said.

While 2020 has proven unexpectedly good for business, it wasn’t without its challenges. There were factory closures and supply chain disruptions that stalled hot tub production, plus the uncertainty over the economy.

While many of the factories have reopened, Dresser said demand still outpaces supply. The current wait time for a new spa is six to nine months. People who ordered a hot tub in May are receiving their purchases this month.

“Demand has not backed off,” said Dresser. “The wait time has turned some people off, but everyone is in the same boat.”

For Fogerty, most worrisome was a move in the of the pandemic to a larger industrial space after his previous location was sold and he was forced to vacate.

“When all this stuff hit I thought, Oh man, what have I done! No one is going to buy a spa if they don’t know if they will have a job,” said Fogerty. “Turns out I couldn’t have been more wrong.”