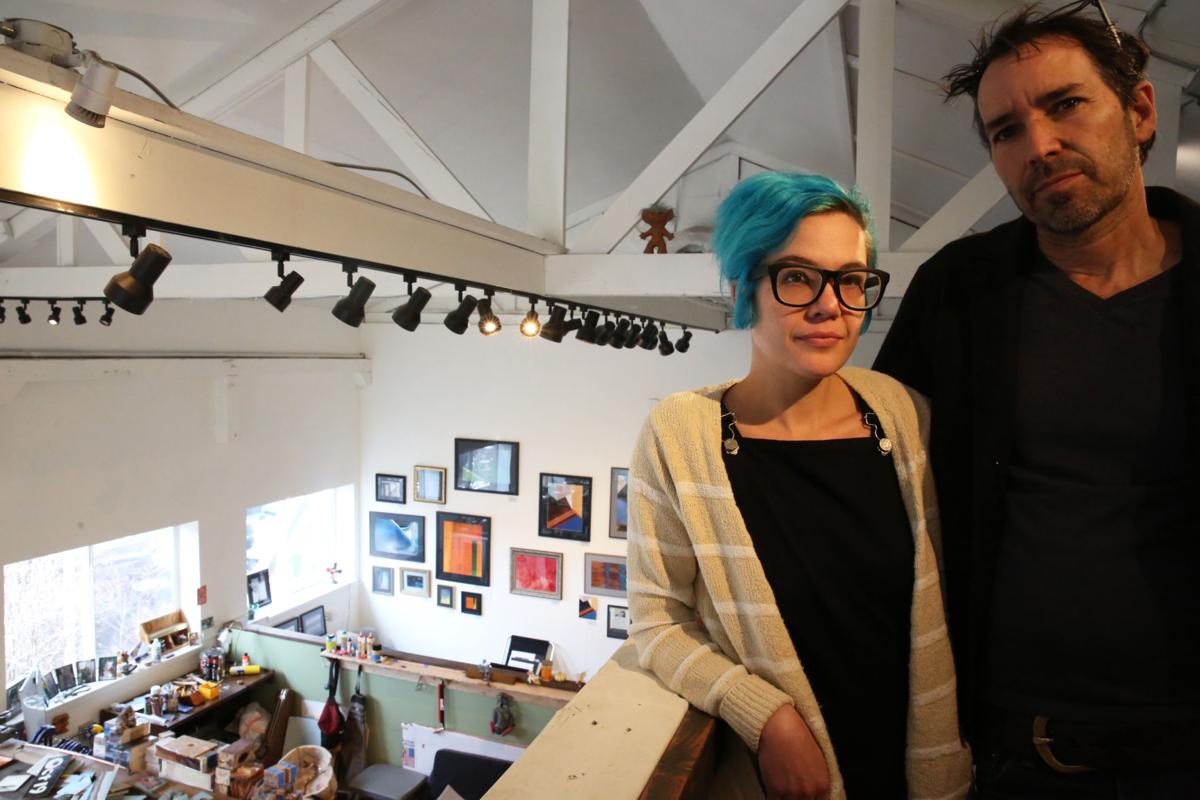 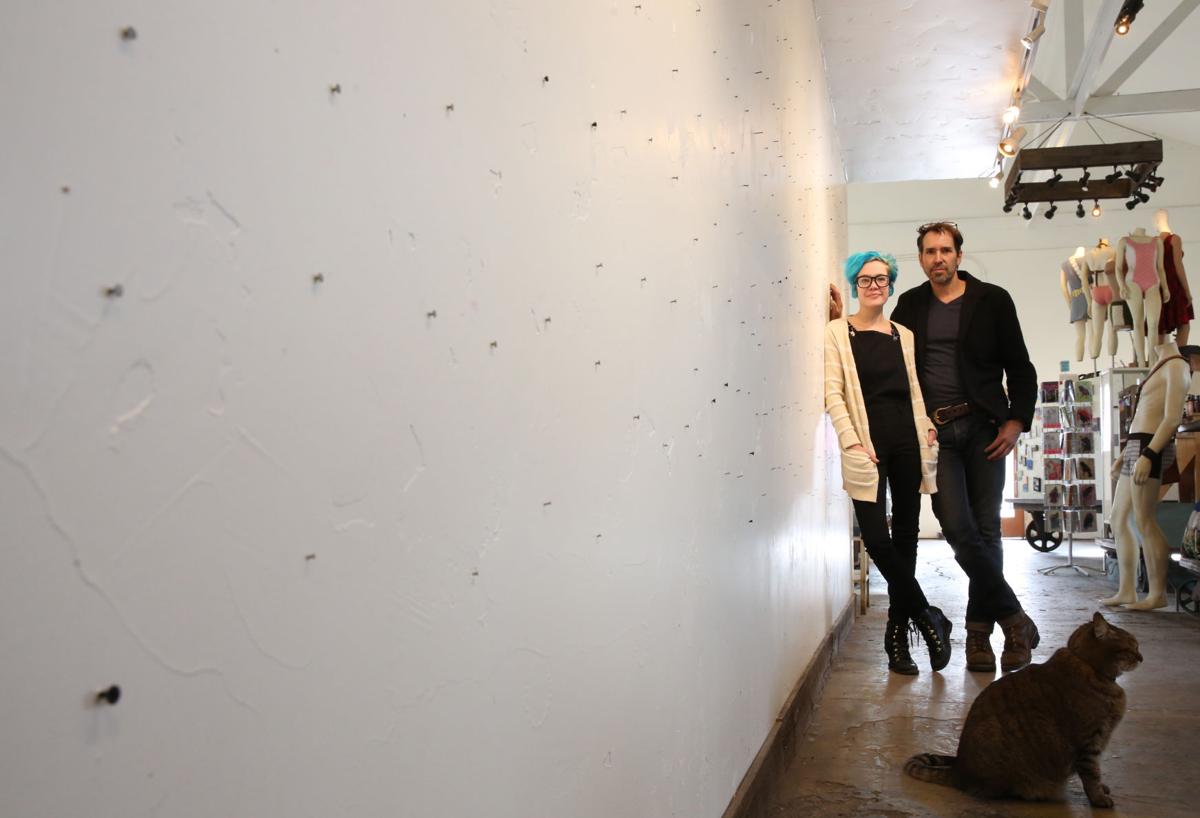 Above, hundreds of nails are all that’s left on the gallery wall where art used to be displayed at Bright Place Gallery. Co-founders Stuart Breidenstein and Abby Dubief stand with the shop’s cat, Leonardo F. Bend. They created an artist collective in Bend but will likely be moving the workspace out of the area entirely.(Dean Guernsey/Bulletin photos)

Above, hundreds of nails are all that’s left on the gallery wall where art used to be displayed at Bright Place Gallery. Co-founders Stuart Breidenstein and Abby Dubief stand with the shop’s cat, Leonardo F. Bend. They created an artist collective in Bend but will likely be moving the workspace out of the area entirely.(Dean Guernsey/Bulletin photos)

Simone Kujak lays out beige fabric on a work table inside The Workhouse on Scott Street in Bend.

For Kujak, a 35-year-old fiber artist, plying her art in a rental space is a monumental step in her artistic pursuit. Just two months before, she had been working out of her home.

“I’m not in the position to say I’m making it, but I’m in the category of saying I’m a struggling artist,” Kujak said. “I wanted to take my work to the next level, and coming here was a step in that process. It’s scary.”

When she signed a lease for a space at The Workhouse, she joined other artists who rent dedicated spaces where they can create and sell their work.

It’s tough to find affordable industrial space in Bend these days, particularly with the closure of Bright Place Gallery at the Ninth Street Village at the end of the year. In Bend, the vacancy rate for industrial space is about 1.6%, compared to Redmond, which is about 3.8%. Base rents typically go for about 75 cents a square foot with other charges on top of the rent, said Peter May, a Compass Commercial broker.

“Historically, this happens all the time,” said Ian Factor, a Central Oregon Community College art instructor. “Everywhere I’ve lived, artists make a space that becomes successful, and a couple of years later, they can’t afford to stay there.

“Artists bring the culture and make a place cool,” he added. “Getting priced out of the market is common.”

At the Ninth Street Village, artists Stuart Breidenstein and Abby Dubief carved out a space three years ago for a dozen working artists to create and sell their art. They invested about $15,000 of their own money into painting walls, building a deck, installing new flooring and signed a three-year lease with an option for six more. He figured the investment was worth it because he’d be there a while.

Now, he and Dubief are in search of a new home for their art, one that they can own. Many of the other artists are scrambling to find new workspaces as well. For Breidenstein, it most likely won’t be in Bend, or anywhere in Central Oregon.

“We figured the rent would be somewhat stable for nine years. We knew it would rise a bit,” Breidenstein said. “We can’t raise our artists’ rent. It happened so fast. We got priced out of Bend.”

This is not the first time Breidenstein has pulled up stakes and started over. He had a shop next to the Workhouse and experienced the same issue, he said.

“It’s like when we make the space cool, make sales, the landlords decide to raise the rent,” Breidenstein said. “We can’t see staying any place, anywhere around Bend. It’s just too expensive.”

At Ninth Street Village, Annie Willis and the three other partners have the development rights for the entire three acres, which include the artist area. They own and operate the DIYcave on site. Their vision was to create a place where people, from artists to regular folks, can make things using tools or rent space, Willis said.

“Our vision has been to create a coworking space,” Willis said. “Stuart heard about the space and came to us. His vision was to have a cooperative gallery like the Workhouse.”

But after five years of investment, Willis and her partners need to meet expenses. Initially, rents were offered at a reduced rate, she said, to help establish the area.

“There’s a certain type of energy brought to a community and excitement about life from artists,” Factor said. “Without that type of influence, a community runs the risk of becoming a dying corporate town, a town that is without a soul or color.”

Breidenstein’s artist space occupies about a quarter of the entire property, said Willis, who is talking with other artists about taking over the space. The space will be called something different as Breidenstein will take the name, Bright Place Gallery, with him.

“We had to raise the rates because we’re developing a community here,” she said. “There’s higher value in that. Our mission is to create a cooperative work space for makers who produce things.”

Finding a space that’s affordable and provides walk-in retail traffic can be hard for an artist.

Much of the costs of space depends on the amenities, the location, the marketing and the common area maintenance cost, May said.

A typical standalone industrial space in a town like Madras, in comparison, goes for about 52 cents a square foot, May said.

“A lot of this is supply and demand,” May said. “Industrial space has gotten a lot tighter. Maybe artists might look to Redmond for more affordability. With the higher vacancy rate, there’s wiggle room in price points.”

At the Workhouse, artists pay anywhere form $400 to $500 a month depending on the size and location of the space. The rents are higher because there’s walk-in traffic.

In Prineville, Rick Steber & Co.- Makers charges $250 a month for a 10-by-12 foot dedicated space for an artist, Steber said. The Prineville space, at 131 NE Fifth St., opened in September and includes a showroom where the work of about 54 artists is on display, he said.

“It’s difficult for artists to find a space to work that suits an artist. It’s important to support artists.”

At the DIYcave in Bend, Willis said artists or makers can rent a dedicated space for $385 a month.

“If you’re an artist looking for a place to work and sell your work, Bend would be the place you’d want because it has tourists and people with money,” May said.

Keeping a space at the Workhouse will be the ultimate test of success for Kujak and her wearable art. She will learn whether there’s a market for her hand-dyed clothes outside friends and family.

“This is an ideal location,” Kujak said. “There’s a fair amount of foot traffic for my small-batch clothing.”