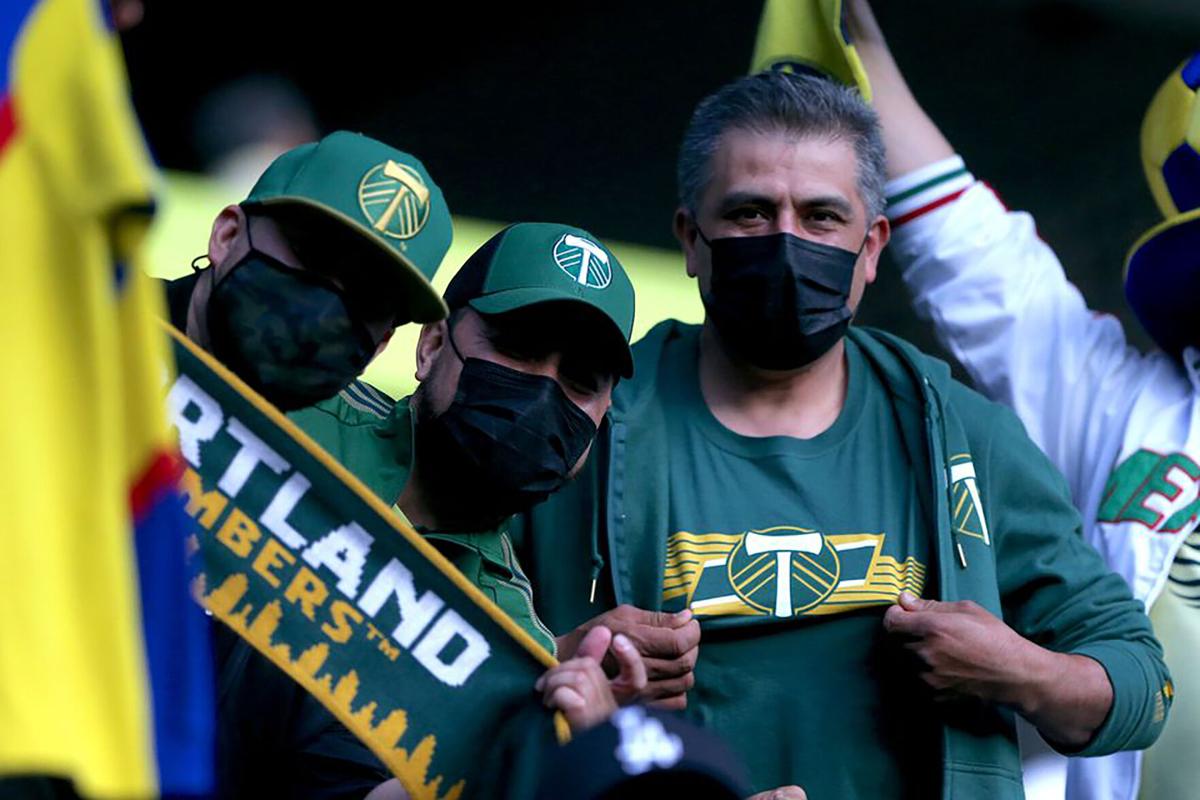 Portland Timbers fans at Providence Park in Portland for a match against Club América on Wednesday, the first of two meetings between the teams in the CONCACAF Champions League tournament. Oregon pro sports franchises are struggling to understand the governor’s harsh attendance restrictions compared to those of other states. 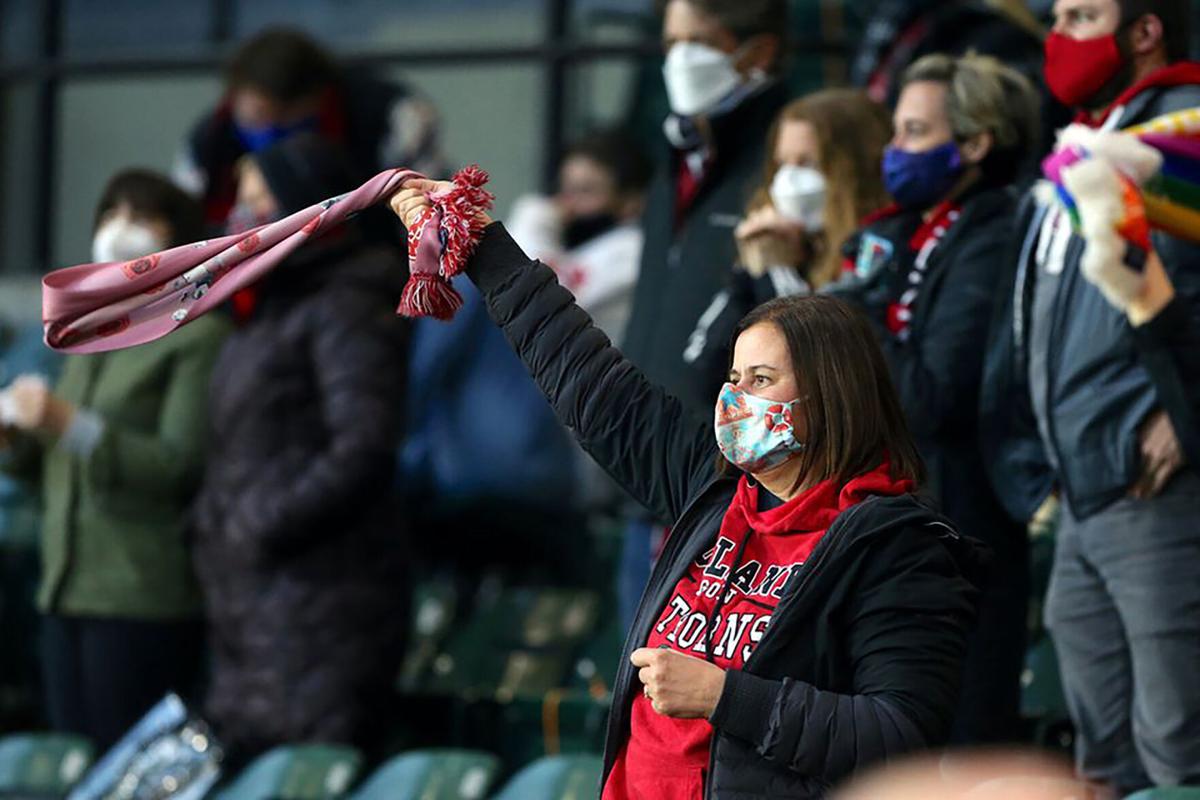 Fans cheer on the Portland Thorns in an NWSL Challenge Cup match against Kansas City at Providence Park in Portland on April 9. 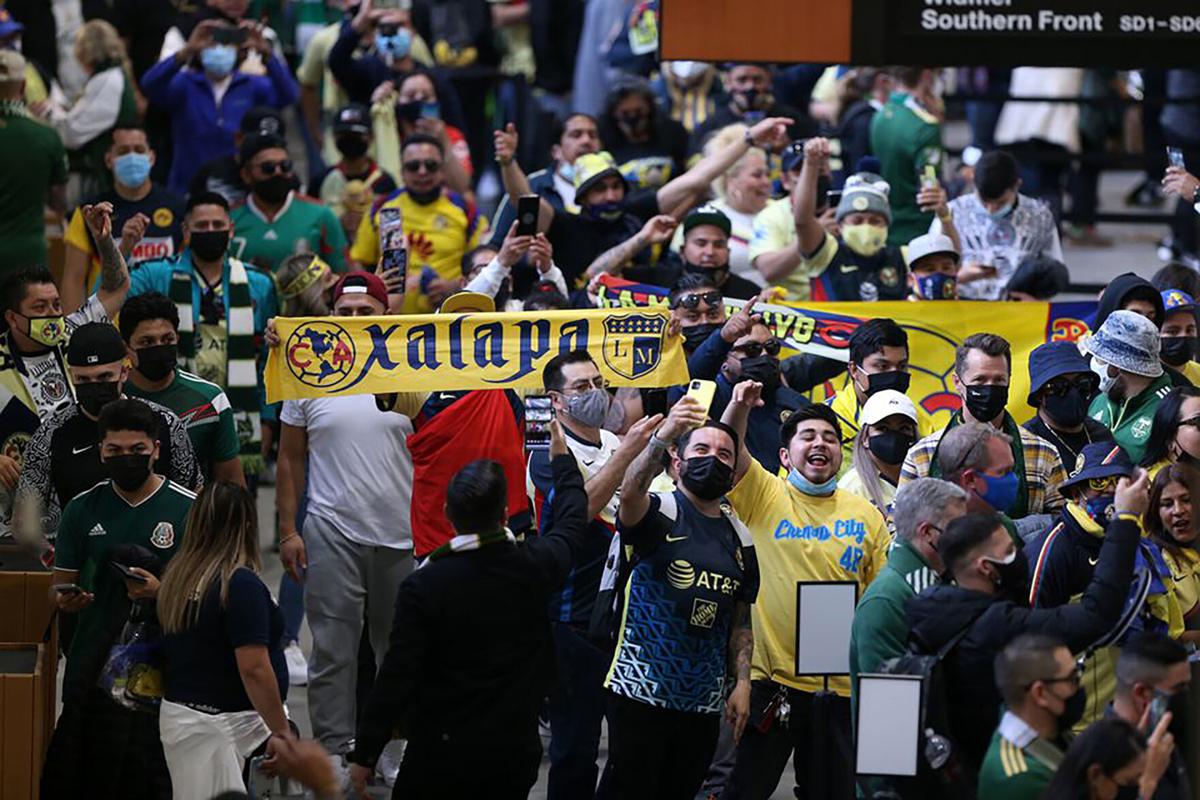 Club América supporters march through the concourse at Providence Park ahead of a CONCACAF Champions League tournament matchup with the Portland Timbers on Wednesday.

Portland Timbers fans at Providence Park in Portland for a match against Club América on Wednesday, the first of two meetings between the teams in the CONCACAF Champions League tournament. Oregon pro sports franchises are struggling to understand the governor’s harsh attendance restrictions compared to those of other states.

Fans cheer on the Portland Thorns in an NWSL Challenge Cup match against Kansas City at Providence Park in Portland on April 9.

Club América supporters march through the concourse at Providence Park ahead of a CONCACAF Champions League tournament matchup with the Portland Timbers on Wednesday.

The executives who run the professional sports franchises in our state found themselves all wondering the same thing last week.

Who in the world is in her ear?

Those franchise executives are pulling their hair out trying to figure out where our state’s top politician developed her hardline stance when it comes fan attendance at pro sporting events.

“She was in sync with Washington and California at the beginning of the pandemic,” one team official said this week.

“She was afraid to be on her own. But now, she’s completely alone. It’s baffling.

“It makes you wonder who is in her ear.”

The Trail Blazers, for example, are officially the only NBA team in the country that won’t be allowed to have fans at their home arena this season.

The franchise presented a detailed safety protocol that was originally approved by Gov. Brown and the Oregon Health Authority. It allowed for 10% attendance — 1,933 fans — in the nearly 20,000-seat arena.

That exemption was rescinded last week amid a series of county shutdowns that also affected smaller businesses such as restaurants and retail stores.

That’s not leadership. It’s not even common sense.

Team president Chris McGowan said in a statement provided to The Oregonian/OregonLive:

“There’s no denying that the pandemic has required sacrifices from everyone. As COVID cases and hospitalizations are rising, we are confident that the virus will recede substantially as vaccination rates continue to rise.

“In consultation with infectious disease experts and the NBA, our team worked incredibly hard to develop a meticulously detailed plan that maintains the safety of our players, staff and fans and meets or exceeds guidance from the state and CDC. After months of diligent work with the state and OHA, we still don’t know more now about our return to fans than we did at the beginning of the season. With our regular season ending on May 16, we are the last team across all U.S. professional sports leagues without a clear path of return.”

Meanwhile, the Timbers and Thorns professional soccer franchises are bracing for a rough week spent dealing with our state officials. The franchises offered a “no comment” on the issue. They are currently cleared to have 15% capacity at the downtown outdoor Providence Park venue but the whisper is that approved exemption is now in jeopardy as well.

The Timbers and Thorns have played five combined games this season with fans in attendance. The events were viewed as successful and safe. The franchises were originally approved for 25% capacity and sold tickets accordingly. Then, the maximum capacity was rolled back to only 15% and the teams had to scramble figure out how to make that work with customers who had already purchased tickets.

They figured it out.

The soccer franchises are now bracing for more drama and planning a series of preemptive contingency plans. One includes dropping to 10% capacity and closing down food and beverage. Another includes requiring fans to present proof of vaccination before they’re admitted to the outdoor stadium. But our state’s two wildly successful professional soccer franchises are in a scramble to avoid a nationally televised embarrassment.

The Timbers vs. Sounders rivalry game on May 9 is scheduled for a national broadcast on ABC. One day before, the Thorns could be playing in the Challenge Cup championship game on CBS. Two wonderful opportunities to showcase the state of Oregon.

What will the national narrative be?

I asked a sports executive who has worked in professional sports for three-plus decades what the optics on empty stadiums would be. Keep in mind, the rest of the country is already following protocols and safely allowing fans into venues. The College Football Playoff featured fans in the stadiums. The NCAA basketball tournament in Indianapolis had a limited number of fans. Also, the entire country watched the NFL draft the last three days with fans allowed inside a number of venues across the country.

It’s uplifting stuff. At one point of the first-round draft broadcast on Thursday night, the studio commentators even broke from talking about the draft prospects and teams to say how inspiring it was to see a limited number of fans safely back inside the venues. So what’s the story for Oregon if those two games aren’t attended? And what’s the narrative when the NBA playoffs start and Portland is the only participant that doesn’t have fans present at home games?

Said the longtime executive: “The narrative nationally will be that Oregon doesn’t have its (expletive) together.”

What is it about our state that consistently leaves it behind the rest of the country?

I asked Gov. Brown’s spokesperson, Charles Boyle, for a comment on Friday morning.

“The capacity issue the governor is focused on is making sure Portland-area hospitals and ICUs are not overwhelmed so we can save lives,” Boyle said. “I hope you will encourage your readers and listeners to go and get vaccinated as soon as possible, so we can put the pandemic behind us.”

Boyle also said the governor is getting her guidance from the Oregon Health Authority.

At least the governor’s office finally is allowing high school runners to remove masks when competing at six feet of distance or more after Summit High runner Maggie Williams had a health scare during a race on April 21.

But now I’m left with the same question that our state’s pro sports franchises are asking.

Who is in Gov. Brown’s ear?

That’s become the question to ask. Because she’s no longer following Washington and California. Both of those states allow fans inside venues, no problem. They also allow all outdoor competition for kids, maskless. She’s not following any other state in our country. She’s out there, alone now. And it’s left our state dead last when it comes to sports.